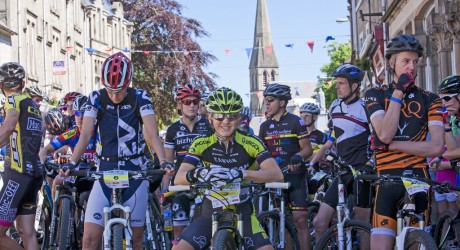 ON Saturday 2 May, up to 100 elite endurance cross country mountain bike riders from throughout the UK will descend on Selkirk in the Scottish Borders for the 2015 British Mountain Bike Marathon Championships, supported by EventScotland.

Leading British endurance athletes will take on a challenging 75km single lap course on some of the best trails the Scottish Borders has to offer.

It includes a fantastic mix of flowy natural and man made singletrack, twin-track forest roads, ancient drove roads, lung and thigh busting climbs, grin-inducing descents; and some of the very best trail centre downhill tracks at Innerleithen, in their bid to claim the coveted red, white and blue British National Championships winner’s jersey (in both male and female classes).

Begins a spokesperson: “Heading the Scottish charge in the women’s race will be Lee Craigie (35) – Canondale UK – from Inverness, the British National XC MTB Champion 2012 and 2013 and the highest-placed Scottish female rider at the Glasgow Commonwealth Games.

“Hot on her heals will be local rider, Isla Short (18) – Novus OMX Pro Team – considered a rising star of mountain biking from Cardrona in the Scottish Borders, the 2014 British National Junior XC MTB Champion who took seventh place in the 2014 Junior World Championships.

The spokesperson added: “Among those fighting for the men’s title will be reigning British Marathon Champion Dan Fleeman – Metalek-Kuota, the endurance cyclist Richard Dunnett, who in 2012 came second in the first-ever World Cycle Race, cycling 145 miles per day unsupported and completing the extreme challenge in an impressive 124 days, 13 hours and 25 minutes; Ben Thomas – Vauxhall Motors Cycling Team – who set a new course record to win the 2014 End to End Mountain Bike Challenge in the Isle of Man, completing the 46-mile (75km) course in a time of two hours 44 minutes and 36 seconds; and Welshman Dan Evans (33) – Cannondale UK and Team Elite – the 2014 British Hill Climb National Champion.

“Riders flying the flag for Scotland include Rab Wardell (29 ) – Dirt School – a World Cup cross-country and international cyclocross racer who dominated the Scottish cyclocross scene in 2014, winning the Scottish Series and Championships titles. Alongside him will be Andy Barlow, Scottish and British Cross Country MTB Champion in 2009, Trans Scotland Solo Winner in 2007 and Scottish Junior Downhill mountain bike Champion in 1997. They will be joined by Edinburgh based Rory Downie, an Xterra triathlete, who was the 2012 ETU U23 European Champion and finished tenth in the European Tour and 19th at the ITU World Championships in his first year as a professional triathlete in 2014.”

The marathon championships is being organised by Durty Events as part of the ever-popular Selkirk Mountain Bike Marathon open cycling event.

The Selkirk MTB Marathon has a choice of three single-loop and fully marked courses (approx. 25km, 50km and 75km), all setting off from Selkirk High Street and visiting the valleys of the Rivers Tweed, Yarrow and Ettrick.

The epic sportive event has something for families, novices, intermediates, enthusiasts and racing snakes alike.

On the evening of Friday 1 May 2015 Durty Events are also taking over the centre of Selkirk and will turn it over to a free festival of two-wheeled mayhem for all the family.

From 19:00 to 21:00, The Selkirk Bike Festival, supported by Scottish Borders Council, will be staged on the High Street with an action-packed programme that includes bike stunt displays, head to head Rolalpolluza style racing, bike film screenings, a Pump Track and a mountain bike obstacle course.

For further information and to arrange interviews please contact:

The British MTB Marathon Championships and the Selkirk MTB Marathon will take place on Saturday 2 May 2015. Entry fees (including camping) are:

Selkirk MTB Marathon – Entry on the day (subject to availability) – £40

Online entry is via http://www.entrycentral.com and there are also links from www.selkirkmtbmarathon.com.

For more information on Durty Events’ 2015 programme of events go to: http://www.durtyevents.com/

EventScotland – EventScotland is working to make Scotland the perfect stage for events. By developing an exciting portfolio of sporting and cultural events, EventScotland is helping to raise Scotland’s international profile and boost the economy by attracting more visitors. For further information about EventScotland, its funding programmes and latest event news visit www.EventScotland.org.

Follow EventScotland on Twitter @EventScotNews. EventScotland is part of VisitScotland, the national tourism organisation which markets Scotland as a tourism destination across the world, gives support to the tourism industry and brings sustainable tourism growth to Scotland.