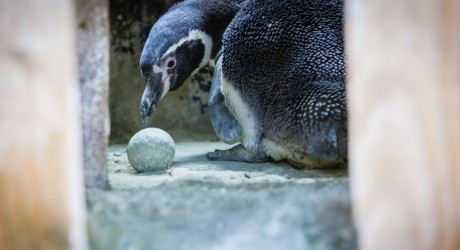 AFTER the excitement that Andi the Penguin had laid an egg this Easter, hearts at St Andrews Aquarium are cracking this week with the news that Andi’s egg sadly did not produce the much anticipated chick.

The Aquarium team had been observing Andi, a Humboldt penguin, closely, ensuring that she was in a relaxed environment where she could concentrate on nurturing her egg. Unfortunately, nature has played a guiding hand and, sadly, this egg was no match for Mother Nature.

Andi, named in honour of Andy Murray who became Wimbledon Champion in 2013, made a splash at Easter unexpectedly laying an egg and many people, both visitors and staff at the Aquarium had been rooting for Andi and her first penguin chick.

“We are very sad for Andi that her first egg didn’t turn into a chick, but the egg’s arrival was very, very unexpected as Andi is still quite a young penguin, so we were prepared for all potential outcomes although that doesn’t make it any less heart breaking.

“Andi appears to be really well in spite of her loss and the team are keeping an extra special close eye on her.”

For further information contact Fraser Kirk on 01738 658187 or email f.kirk@volpa.co.uk