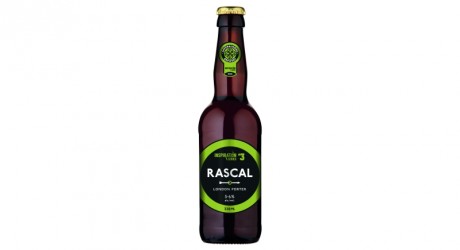 RASCAL London Porter, the latest beer to launch from Inveralmond Brewery’s award-winning Inspiration Series, has proved an early hit with beer lovers, after scooping Champion Beer at the World’s Biggest Ale Festival, run by JD Wetherspoon – before it has even been officially launched by the brewery!

After winning the Dark Ales Class, Rascal progressed to the final and won the overall Champion Beer award for the festival which JD Wetherspoon customers were able to vote for online.

The Inspiration Series of beers, developed by the Perth-based independent craft beer maker’s head brewer, Ken Duncan, pay homage to brewing artisans around the world as well as showcasing Inveralmond Brewery’s versatility as a craft brewer.

Rascal, the third to be launched in the Inspiration Series, is inspired by the mighty brewing styles of 18th century London. With a spicy aroma, the pale ale has notes of silky sumptuous mocha flavours with a complex, mellow finish.

Rascal’s introduction to the beer market follows the 2014 launch of the Inspiration Series’ hugely popular Czech-inspired brew, Sunburst and, with a respectful nod to the classic brewing artisans of Belgium, De Mons, which also launched last year.

Others in the series are yet to be revealed, but each new beer has proved to be an instant fan favourite.

David Aucutt, from East West Ales, explained what made Rascal stand out from its beer contemporaries to be crowned Champion Beer at the World’s Biggest Ale Festival. He said: “When judging the beers shortlisted for the festival, Rascal won the Dark Ales Class initially as it was considered the beer with the most balanced flavour.

“Rascal won the overall Champion Beer award for the same reason, but also for being the beer the judges considered to be the most distinctive.

“Of all the beers’ tasted, it was the one they would most like to drink again. Due to the success of Rascal, it is now to be featured on the JD Wetherspoon national guest ale list for July and August, 2015.”

“We are delighted that the latest beer from our Inspiration Series, Rascal London Porter, has been an instant hit with beer fans.

“Receiving an accolade as high as Champion Beer at the World’s Biggest Ale Festival, before you’ve formally launched it to the world, shows how Rascal has already cemented itself with a strong fan base.

“It is great to be able to celebrate other beer cultures through our Inspiration Series and we hope fans will continue to enjoy the new additions, as well as our range of other craft beers available.”

Founded in the mid-nineties, Inveralmond Brewery’s extensive range of craft beers have continued to grow in popularity with products including Ossian, Lia Fail and Thrappledouser found in most major UK supermarkets and now exported to countries in continental Europe, Americas and Asia Pacific.

Rascal London Porter is available to both the on and off trade in 330ml bottles and will be available at many established Inveralmond Beer venues.

For further information about The Inveralmond Brewery or to request a sample of Rascal London Porter for review, please contact Tricia Fox on 07989 955039 or t.fox@volpa.co.uk

Notes to Editors
About Inveralmond Brewery