Media Release: Macmillan Cycletta Scotland on track to help get one million ladies on their bikes by 2020 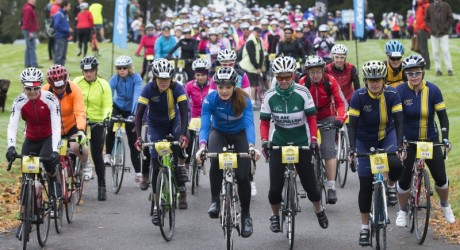 MACMILLAN CYCLETTA, the leading series of women-only bike rides, is on track to make a significant contribution to plans to get one million women cycling by 2020.

The Scottish event which is open for entries, takes place on Sunday 19th July at Scone Palace.

Last year, more women than ever before took to two wheels to participate in the cycling series which was launched to encourage women of all ages and abilities to get on their bike.

Almost 5,000 women across the UK took part in Macmillan Cycletta last year, many of them choosing to raise vital funds for Official Charity Partner, Macmillan Cancer Support in the process.

Macmillan Cycletta Scotland is open to women of all ages and abilities and includes different distances ranging from 20km to 150km to ensure that cycling participation is accessible for women regardless of their experience and abilities.

In 2013, British Cycling announced (here) a target to get one million more women riding bikes by 2020.

For the younger cycling enthusiasts, all events in the Macmillan Cycletta series include a Scootathlon taking place on the same day. The Scootathlon is a mini fun triathlon for children between the ages of four and eight where they scoot, bike and run.

“The Scottish event is always fantastic, with more and more ladies signing up to take part each year.

“There are many reasons why women should get out on their bikes – whether it’s to keep fit, socialise or to raise money for a good cause like Macmillan Cancer Support.

“Some cycling events can feel intimidating, particularly if you haven’t been on a bike for years and that’s exactly what Macmillan Cycletta aims to change.”

Each Macmillan Cycletta takes place in stunning surroundings, on safe, well-managed roads and with loads of fun for all the family. Ladies are encouraged to bring the whole clan along to cheer them on.

There is also an active Twitter account (@cycletta) and www.facebook.com/cycletta resources to encourage participants to stay up-to-date with the latest news and developments.

Macmillan Cycletta is part of the Human Race Women Only series which includes triathlon, swimming, running and cycling events.

To book your place visit: www.cycletta.co.uk

Macmillan Cycletta is a leading series of women-only cycling events, designed for committed cyclists as well as those new to sportives. Cyclists can secure their place at these events by signing up at http://humanrace.co.uk/cycletta/.