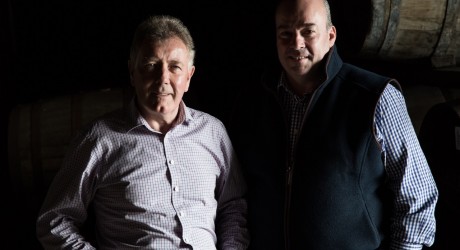 JIM McEwan, production director and master distiller at Bruichladdich Distillery on the Isle of Islay, has announced that he is to retire in July of this year after more than 52 years in the business.

A legendary figure in the Scotch whisky industry, Jim joined the independent company that was to drive the renaissance of the then moribund Bruichladdich in the year 2000.

Describing it as the ‘Cinderella’ distillery, he released an innovative and thought-provoking portfolio of single malts that challenged previous perceptions in the category.

Jim McEwan has also been the architect of a distillation programme of unparalleled complexity through which the progressive Hebridean distillery explored barley variety, provenance, traceability and the concept of terroir.

McEwan leaves a legacy of over 20 different spirit styles maturing in the company warehouses sitting close to the shores of his beloved Loch Indaal.

Paying tribute to the immense part his friend has played in elevating Bruichladdich to the status of a globally admired brand, CEO, Simon Coughlin, said: “Working with Jim for these past 15 years has been both exciting and stimulating.

“His deep understanding of the liquid and his ability to communicate the passion he feels for the spirit, for Islay and its people has been an inspiration to us all.

“Jim’s achievements and accolades are innumerable. His creation of Octomore, the world’s most heavily-peated whisky series, and then the innovation behind The Botanist Islay Dry Gin cemented his reputation as one of the greatest distillers of his generation.

“We are, of course, delighted that Jim and his wife, Barbara, built their house next door, so while we wish them a long and happy retirement, we are able to look forward to his continuing involvement on a less formal basis.”

Speaking earlier, Jim McEwan said: “This has been an incredible journey. As I take a small step across the road to spend more time with my wife and family, I leave behind a truly great team of 80 men and women who will carry this distillery and its spirit forward.

“I am so proud to have been able to play my part in nurturing what was an incredible opportunity, to bring this old distillery back to life and reinvest in Islay and its people.

“I would particularly like to thank Simon Coughlin and my fellow directors for having the faith to allow me to follow the distiller’s muse along sometimes uncharted paths.

“I would also like to particularly thank Allan Logan, by whose steady hand this magnificent ship will ride the waves into the future; and Adam Hannett, whose extraordinary nose and palate will carry the great traditions of our spirit forward into the next generation. Slainte!”