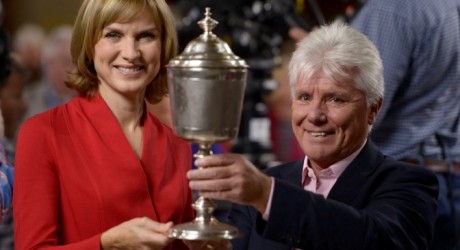 A RARE silver cup gifted to a Scottish charity in London four centuries ago will resurface this weekend as the ‘find of the year’ in the latest episode of the BBC Antiques roadshow.

The 17th century Loving Cup was bequeathed to ScotsCare (then known as the Scottish Hospital of the Foundation of Charles II ) in 1683 by its founder, James Kynneir, a successful Scottish weaver.

The charity was originally set up by Scottish merchants who had followed James VI/I to London when he acceded to the English throne in 1603. Its purpose then, as it is now, was to help London Scots who fell on hard times.

The cup was used during the charity’s ceremonial events, particularly on St Andrew’s Day.

“It is very moving to see our Loving Cup come to the public’s attention again.

“It goes back to the times of the Great Plague, when we were already able to support fellow-Scots in distress, and symbolises the sometimes forgotten virtues of fellowship and prudence.

“The generosity and hard work of generations before us has enabled us to carry on making a crucial difference to the lives of many Scots in London today, albeit now with a team of dedicated professional staff.”

At the time of the recording at the Kelvingrove gallery in Glasgow last October, Antiques Roadshow’s expert Alastair Dickenson described the Loving Cup as “the find of the year”.

Since its valuation – which took ScotsCare by surprise- the Loving Cup has been safely stored in a vault at an undisclosed location.

The episode of the Antiques Roadshow featuring the Loving Cup will be broadcast on Sunday 3 May at 7.30 pm (5.05 pm in Scotland)