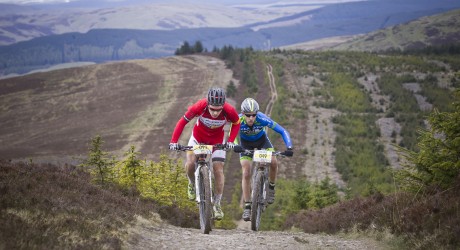 IT was a Scottish one-two in the women’s race at The 2015 British National Mountain Bike Marathon Championships, supported by EventScotland, staged in Selkirk in The Scottish Borders on Saturday 02 May.

Kerry MacPhee (28) – Rock and Road Cycles, the 2014 Scottish National Cross Country Mountain Bike Champion, a top-15 finisher at the Glasgow Commonwealth Games, took the British title after a very closely-fought race that saw her complete the 75km course, with 2,300m of climb, in 04:31:08.

Kerry MacPhee, from Stirling, said: “I am absolutely delighted, super chuffed with the win, but still quite shocked.

“I worked really hard for it and have been putting in some solid training ahead of the cross country World Cups coming up.

“As a cross-country rider I wanted to get ahead from the start in order to avoid any problems at the more technical sections.

“I passed Lee [Craigie] on the first climb and kept that position to the end. The plan paid off. What a great day!”

Sally Bigham – Topeak Ergon Racing Team, the 2014 British MTB Marathon champion – who was hotly tipped to retain her title in 2015 – was forced to pull out of the race due to illness.

It was a very close race in the men’s British Marathon championships event, with only three minutes separating the top four riders over the 75km distance.

Ben Thomas, from near Reading, said: “A win at the British Marathon Championships was a massive goal for me, the main target for 2015.

“I first visited competed in the race four years ago; I finished fourth and picked up that ambition of winning the title. I had a great ride on some fun and not too technical trails. I am really looking forward to racing my next marathons in Europe wearing the stripes!”

The British Mountain Bike Marathon Championships, organised by Durty Events as part of the ever-popular Selkirk Mountain Bike Marathon open cycling event, saw 89 of the UK’s elite endurance riders take to the challenging 75km single lap course on some of the best trails the Scottish Borders has to offer, testing all riders to the limit.

The Selkirk MTB Marathon saw a further 500 sportive riders take on one of 25km, 50km and 75km single-loop and fully waymarked courses.

They all set off together alongside the elite riders in a mass start from Selkirk High Street.

The routes took them down the valleys and over the hills of the stunning Scottish Borders through Bowhill Country Estate, Yarrowford and Ettrick Valleys, the Forestry Commission’s Yair, Elibank and Traquair forests and the Southern Upland Way.

“The riders loved the fantastic trails we have in the Borders, both natural and man-made, though it’s fair to say a few of them were pretty shattered by the end of their rides.

“The presence of the British Championships brought an extra buzz to the event, as ‘regular’ riders got to line up against stars from the Commonwealth Games and elsewhere. Seeing Scots on the podium was particularly pleasing.

“Similarly, we were really pleased to see how local Borders’ businesses got on board and engaged with the event.”

Paul Bush OBE, director of Events at VisitScotland, said: “Scotland is the perfect stage for mountain biking with all disciplines catered for amongst some of the world’s most spectacular scenery.

“This weekend’s British National Mountain Bike Marathon Championships once again placed Scotland and the Scottish Borders on the map, welcoming both elite mountain bikers and enthusiasts from all over the country to put their skills to the test, whilst enjoying some of the best tracks and trails the region has to offer.”

For further information and to arrange interviews please contact:

All photo credit to Ian Linton Photography unless otherwise stated in file name.

For more information on Durty Events’ 2015 programme of events go to: http://www.durtyevents.com/

EventScotland – EventScotland is working to make Scotland the perfect stage for events. By developing an exciting portfolio of sporting and cultural events EventScotland is helping to raise Scotland’s international profile and boost the economy by attracting more visitors.

EventScotland is part of VisitScotland, the national tourism organisation which markets Scotland as a tourism destination across the world, gives support to the tourism industry and brings sustainable tourism growth to Scotland.