A MAGAZINE produced by pupils at Dollar Academy has been named Magazine of the Year at awards celebrating the best of schools media in Scotland.

Seventeen schools were represented at the ImPRESS awards ceremony in Edinburgh, on Friday, all competing in 14 categories.

Dollar Academy received the most accolades for its magazine, ‘The Galley’, with four awards, including Best Cover. James Gillespie’s High School in Edinburgh won two awards for its newspaper, The Spark, with Fiorenza Kirkwood named as Inspirational Teacher and Alex Hamilton as Best Sports Columnist.

The awards, which were organised by Menzies Distribution, aim to encourage young people into careers in publishing and the creative industries and were of particular interest to pupils who have an interest in writing, photography, design and business. 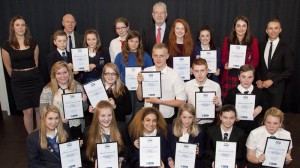 Magazine of the Year

Newsletter of the Year

Newspaper of the Year