LAST month, Scots freelance photographer, Ian MacNicol, had one of his images from last year’s Olympic Games in London named as the best swimming photograph of 2012. 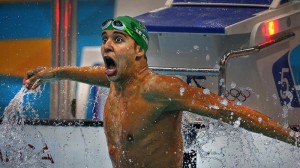 MacNicol’s several other awards include being twice Scottish Sports Photographer of the Year.

Here, he explains the story behind…

There were 80 passes being provided to UK-based photographers, with ten for freelancers, such as me. Your track record counts when you are applying for passes, so the fact that I had covered the Beijing Summer Olympics in 2008 and the Vancouver Winter ones will have counted in my favour. I’m a freelancer who distributes my images via Getty Images, as a contributor.

When you apply, you have to submit your CV. A panel of 11 people whittled the list of applicants down from hundreds to 80, most of them agency people. I’ve been lucky enough to have covered lots of events: world swimming championships, Commonwealth Games, Wimbledon, Champions League finals, etc.

That I was very lucky to be accredited. Being at an Olympics in your home country – which will probably only happen once in your lifetime – is probably the biggest inspiration any sports photographer could get.

This race in particular was massive. All the world’s eyes were on [the US’s] Michael Phelps. He had won the event in Beijing and at Athens, four years previously. At London, there was a new system where a single light flashes on the starting block of the winner, two for second, and so on. Normally, swimmers have to look up to the scoreboard. When I saw two lights on Phelps’ block, because he had finished with the silver, I just swung around.

Instinct had taken over. Maybe it was a bit of good fortune, but I moved instantly to le Clos, whose eyes were popping in celebration. Often, swimming celebration pictures are a bit messy because the background is usually quite busy, such as TV camera crews in action. But all that was behind Phelps, not le Clos, so it was a really clean background that I managed to get.

And then, basically, as soon as you’ve shot the pictures, you’re downloading them on to your laptop and doing a quick edit on your best couple of pictures.

I had a sequence of seven frames of the celebration.

Working for Getty, speed is of the essence. So, you add the caption to the images you have chosen to email and then they are away, by FTP [File Transfer Protocol].

Effectively, within moments of you having sent them, Getty – which had a huge office within the Olympic park – had them going around the world.

I use Canon and the camera body was a 1DX which is a top-end sports camera which had been developed with the Olympic Games in mind. The lens was also launched around the Olympics: a 400m f2.8 MkII. But because I had an 1.4 extender, to increase the magnification, I had to shoot at f4. The lower the ‘f number’, the larger the aperture and the more that light floods in, making it possible to work at fast shutter speeds. It does mean, though, you are working with a shallower the depth of field. I shot at 1/1600th of a second. The speed setting was ISO 2000 which, had it been film of a few years ago, rather than digital, would have resulted in a grain the size of hailstones. You can use high ISOs without grainy images being the result.

It was one of the best races in the aquatics centre and resulted in the “beautiful boy” TV interview by le Clos’s dad.

When I was at college, I was inspired by the likes of W. Eugene Smith, Don McCullin and Steve McCurry – none of whom, it has to be said, were sports photographers.

I am a huge admirer of Francois Xavier Marit, a French photographer at AFP who specialises in underwater swimming photography.