THE Herald newspaper has launched a new look today, with among the most striking features being the stripping out of a lot of its previous colour, in the hope readers will embrace the paper as a cleaner, more upmarket product.

With greater design consistency throughout the paper than before, not least the separate sports supplement, today’s edition also sees a higher average story count per page, plus a beefed up Op Ed section that will see the paper’s several specialist correspondents being given a platform to air their views.

Today, as well as the regular Colette Douglas Home and Harry Reid penning columns for the section, social affairs correspondent, Stephen Naysmith, gets to write at length about Universal Credit.

Today’s edition certainly feels as if it has much more in it than usual. A new feature sees diarist, Ken Smith, ‘At Large’, on what will be a regular Tuesday page, The Herald Social. Today, there are pictures from both the Epilepsy Scotland Glasgow Wags Dinner and the Scottish Hotel of the Year Awards. 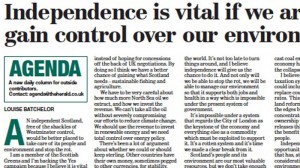 In a move not dissimilar to that being explored by rival, The Scotsman, there is an Agenda slot in the letters page, set up to provide outside voices a platform. Today, former BBC Scotland environment correspondent, Louise Batchelor, helps kick the series off.

Llewellin told allmediascotland.com: “A lot of thought has gone into the changes made and we hope our readers and advertisers like what we have done. 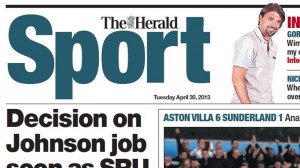 “It was a great team effort and I would like to thank all of those involved for their hard work.”