Your Noon Briefing: Robertson’s play going on tour, You the critic, etc

A PLAY written by a Scots sportswriter is embarking on a tour of the North-east of Scotland, following a successful three-day run last week in Aberdeen.

Penned by Rob Robertson, of the Scottish Daily Mail, The Journey to Gothenburg is about the city’s football club winning the European Cup Winners’ Cup in 1983. It no doubt helped to boost audiences in that it was being performed just days after Aberdeen FC won the League Cup.

Robertson says he got the idea for the play while writing the biography of former Scotland and Aberdeen captain, Willie Miller,  who lifted the 1983 trophy. 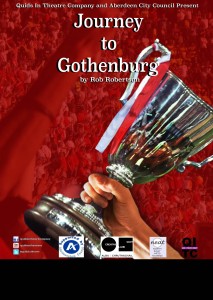 He adds he is indebted to BBC Scotland’s Richard Gordon, himself a big Dons fan and author of Glory in Gothenburg, who spent a day re-recording the match commentary for the third scene when the fans are inside the Ullevi Stadium cheering on their team.

Miller and his Aberdeen teammate, Neil Simpson, both made cameo appearances during last week’s performances.

The play is next being performed at Stonehaven Town Hall this Friday evening.

A CO-founder of the Scots business magazine, Scottish Business Insider, has been appointed the director of a think tank specialising in economics and law.

Ray Perman’s 30 years in journalism has also included six years as the Scottish correspondent for the Financial Times and working at the short-lived Scots title, during the 1980s: The Sunday Standard. He succeeds Jeremy Peat as director of The David Hume Institute.

He is a former chief executive of Scottish Financial Enterprise (from 1999 to 2003). Three years ago, he was appointed chair of the scientific research body, The James Hutton Institute – a position he still holds. He is a former board member of the economic, enterprise, innovation and investment agency, Scottish Enterprise.

MEMBERS of the general public are being invited to submit arts reviews to The Herald, from ‘off the beaten track’.

Begins the paper, of its ‘You the Critic’ initiative: “It’s no secret that if you live in one of Scotland’s cities, there’s no shortage of arts events to enjoy any night of the week.

“And it’s not just the general public who are in the audience of the big theatres: arts critics are present too, fulfilling their role in bringing much-deserved attention to some of the most prominent and significant live performances held throughout the country.

“But what about the smaller venues and those outside the big cities? What of the theatres, halls and centres that work tirelessly to provide their local communities with a cultural programme?”

A FORMER reporter on the Dumfries & Galloway Standard newspaper has penned a book about the England football team.

John Ballard worked at the paper between December 2007 and September 2008 before moving into PR with Cumbria County Council.

Begins a report on the website, holdthefrontpage: “A local journalist-turned-PR man has published a book about ten of the most memorable England games to coincide with the build-up to this year’s World Cup.”

A DISPUTE between an university academic and BBC Scotland has been detailed in a website that describes itself as being “dedicated to challenging the distortions and lies of the corporate press and the privileged classes it serves”.

The article, on Dissident Voice, follows evidence being given a fortnight ago to a Scottish Parliament committee on claims of 3:2 media bias by the BBC against independence.

Meanwhile, Scots columnist, Gerry Hassan, begins on opendemocracy.net: “The BBC and STV are failing the people of Scotland in their coverage of the independence referendum, despite the best attempts of some of the many talented journalists still in these organisations.”