The Story Behind: The re-design of Scots Heritage Magazine

WELCOME to a new feature on allmediascotland.com, which takes a look at the story behind… a particular image, design or tale.

We begin by looking at the re-design of Scots Heritage Magazine, under the new editorship of Scottish Field editor, Richard Bath.

Scottish Field creative editor, Heddy Forrest, is behind the new look which will be officially unveiled with the next issue of the quarterly title, later this month.

Forrest – whose brother is managing director of Wyvex Media, which is owned by her family – has been with Scottish Field for several years. After graduating in English and Politics, from university in 1988, she worked in Australia and New Zealand for two years before returning to the UK where she began writing and taking photographs for both local newspapers, and, later, Scottish World magazine.

She says: “It was always with my eye on the prize of designing layouts. I started sneaking assignments in the production department whenever I could. Eventually my big opportunity came up when the family, in the shape of Wyves Media, bought Scottish Field – we were such a small, tight team that ‘all hands were needed on deck’.

“I am self-taught and learned on the job and have loved being part of the team that has taken the Scottish Field to where it is today.” The brief was to come up with a fresh design that will entice new readers to pick up the magazine while at the same time not alienate existing ones.

Just how much potential there is for this magazine – there are so many Scots scattered around the globe with a real enthusiasm for reading about Scotland and their Scottish heritage. But there are also several other magazines competing in this market so I was aware of a need to make this one stand out from the crowd.

I looked at what Scots was doing in its present incarnation and at what other Scottish magazines of the same ilk are offering readers and hopefully have made the magazine much more visually exciting.

I am lucky to live in one of the most beautiful countries in the world and I work with a superbly-talented photographer in the shape of Angus Blackburn. So I played around with the way the magazine uses photographs and have hopefully come up with a design that makes maximum use of his and other photographers’ images to complement all the great new writers that the editor, Richard Bath, has brought on board. 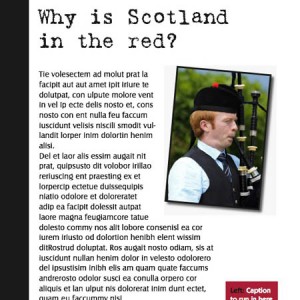 The brief was ‘change but keep it looking classic’. So the cover is Venetian and an Extra Bold Times. For the main features: Venetian and Baskerville on the headings and Carmina on the body copy. For the news pages: Carmina and Castle T.

Throughout the magazine, Typewriter Rough and American Typewriter are used sparingly when I want to make a statement.

We mainly work on Indesign on PC.

It is always exciting to be asked to redesign a publication, especially one with so much potential. I kept in the back of my head the thought that I want the magazine to actually inspire readers who haven’t visited this country to do so. I hope that the use of stunning images – combined with a crisp, clean design – will do just that. That would make me very happy. 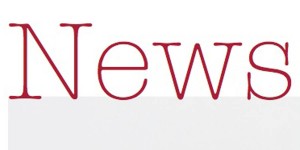 I have worked on previous magazine redesigns, including a couple for Scottish Field and other in-house publications and over the years I have had the great fortune to work with some very talented designers, many of whom have helped shape the direction that my work takes today.

I am a complete magazine junkie and am always buying publications whose design catches my eye.

The magazine could be about anything from cars to cats but if I think it is striking to look at I’ll buy a copy.

I especially love the clever use of typography so enjoy the work of designers who make particularly interesting and unusual use of fonts.