In My Opinion: Gordon Fyfe: Young journalists should consider modelling themselves on Clive Dennier

CLIVE Dennier – who died, tragically, last year – was the sort of journalist with whom it was a pleasure to work.

He worked for the Strathspey & Badenoch Herald, but, following an extensive search, his body was found, after he suffered a hill-walking accident.

It meant he was recognised posthumously at the Highlands and Islands Press Ball and Media Awards last month; he was awarded the Barron Trophy for lifetime achievement for journalism in the region.

I am soon retiring as public relations manager of The Highland Council. I work with journalists every day and the type epitomised by Clive I enjoy working with the most.

He was the sort of reporter that many young journalists should consider modelling themselves on.

He epitomised what is best in a newspaper reporter.

He loved telling a story; he knew what made a good read; he was also a good listener. He was courteous in his approach. He could tease out the information/views he was seeking by listening and being courteous. He was also fair and accurate in the way he told the story. He upheld a code of conduct that wins you respect from your colleagues and the people you deal with on a regular basis.

From the newsdesk point of view, he was a treasure. He had a strong appetite for work, he had a good network of contacts. He could report court and council business accurately but could also find the human interest stories that every paper needs to entertain its readers. He was fun to be around. 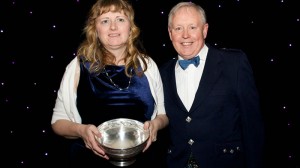 From my PR perspective, he built up a working relationship that every reporter should strive to achieve – one of mutual trust with the PR officers he dealt with. He always gave me the chance to respond to criticism of the Council. He did not leave it to five minutes before deadline to put his question to me. He always respected an ‘off the record’ briefing so he could write with authority but protect his source.

His friendly and understanding nature more than often resulted in Clive getting a call from one of his many contacts with information that led to a story of great interest to his readers.

He will be sorely missed by all who knew him.

In retiring from the Council, I will miss the many reporters I have had the pleasure of working with. The best reporters have been the ones that mirror the courtesy and fairness of Clive.

Gordon Fyfe is public relations manager of The Highland Council, an organisation which covers the biggest geographical area of any mainland council in the UK. He is also chair of the Highland and Islands Media Awards Judging Panel. He retires on June 1 after 24 years with the council and the previous 20 years in journalism with the Inverness Courier and The Press and Journal newspapers.