THE chief executive of The Week magazine and the creative director at WIRED magazine are just two among a stellar line-up of speakers scheduled to appear at this year’s annual Scottish magazines conference, Magfest.

This year’s festival – run by the Scots division of the Professional Publishers Association (PPA) – is taking place on September 18.

The chief executive of The Week is Kerin O’Connor, while the creative director at WIRED is Andrew Diprose. They are joined on the speakers roster by, among others, Marcus Arthur (president of BBC Worldwide, UK and Australia) and Clare Smith (chief marketing officer, Scottish Government).

BEGINS Scott MacNab, in Saturday’s edition of The Scotsman: “The Scottish Government is under fresh pressure to build a new TV and film studio to ensure the country’s movie industry is not left behind its UK counterparts.

“It comes after Screen Yorkshire announced new plans for a film studio outside Leeds.”

The previous day, both The Scotsman and The Herald (here) reported calls for more secure funding for the Scottish Screen Academy training facility (set up ten years ago – as noted here on allmediascotland – by Edinburgh Napier University and Edinburgh College of Art).

PS Saturday’s Scotsman also reported the chair of the Edinburgh International Film Festival, Bob Last, stepping down from the role.

And in concluding that the latest version – broadcast on TV last week and appearing, in various guises in some parts of the press – amounted to “a reheat of allegations which prove nothing, but leave their mark”, he goes on to say: “This week’s events have not been journalism’s finest hour”.

PS Two pages ahead of Walker’s piece in Saturday’s edition of the paper, regular columnist, Brian Wilson, writes (here) of the ‘black arts in politics': say something enough times – especially with an army social media activists behind you – and anything can become ‘fact’.

FOR the fifth, consecutive month, the year-on-year circulation in Scotland of The Times newspaper has increased, according to the latest official figures.

Says newspapers auditing body, ABC, the average circulation in Scotland of the paper during last month was 19,561 – up 5.5 per cent on the average of 18,535 during May last year.

Read more, here, in the allmediascotland.com feature, The Media in Figures.

Says The Guardian – which is the headline sponsor of the festival – she will be the first British politician to do so.

FOND recollections of the late Charles Kennedy, from broadcaster, Hugh Dan MacLennan, who has posted a pic (from the BBC Inverness archive) on his Facebook account, where Kennedy might have worked on a more permanent basis (after university, he was briefly a BBC Scotland journalist) had he not chosen, instead, a career in politics.

Says Hugh Dan: “Tributes to Charles kennedy have included many from former colleagues in the (much-lamented) BBC Highland newsroom in Inverness where Iain MacDonald (standing centre) tried to persuade the young Kennedy that a Fulbright scholarship in the States would be best set aside for the challenges of fishing for news in the Highlands.

“It was here the name, ‘Charles-Charles’, attached itself to him, because of his charming manner of introduction – ‘Hello, I’m Charles. Charles Kennedy.’

“The BBC Highland newsroom was where Kennedy learned many of the tricks of the broadcasting trade into which he launched himself with typical enthusiasm. 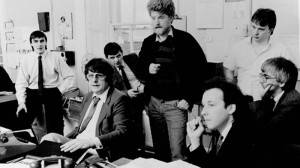 “In the school of hard-knocks journalism of the early 1980s – which spawned the careers of Kenny MacIntyre, Catherine MacLeod and others, some of whom pictured are still working!

“Kennedy proved himself to be less than competent technically – tape editing with razor blades was beyond him – but a master of communication skills.

“He is fondly remembered in Inverness as an outstanding friend and colleague whose continuing links with the newsroom and its people were never forgotten.”

A MUST-read: the Sunday Herald’s Paul Hutcheon and his interview here, with Bob Bird, the last editor of the now defunct Scottish News of the World…

A SCOTS entry in a student television awards competition run by the Royal Television Society has been named a winner.

The entry – in the postgraduate section of the UK-wide awards, now in their 20th year – took the camerawork prize, with the judges saying of it: “This was an incredibly competitive category across all the genres but the winner was felt to have used the camera with great wit and confidence, allowing the story and characters to unfold with elegant pace and to capture the beauty of an intimate world.”

The winner was a joint submission from Edinburgh College of Art and Screen Academy Scotland.

There were Scots too among the shortlisted entries.

« The Media in Figures: National newspaper sales in Scotland
The allmediascotland Academy: David Sawyer: Give it away, for free »