It is taking place at Fir Park, Motherwell, against Bosnia and Herzegovina, and follows a 7-2 victory at the weekend, away to the Faroe Islands.

And immediately following its screening on BBC ALBA, the same channel is broadcasting Honeyballers, a documentary charting the history of Scottish women’s football.

Being transmitted at 2130 on BBC ALBA, Honeyballers has been made by purpleTV, whose director, Margot McCuaig, answers the questions…

Who commissioned the series?

The idea for Honeyballers was submitted from purpleTV to a MG ALBA commissioning round and we were delighted when it was given a green light for transmission for BBC ALBA.

The channel has a strong reputation for commissioning programmes that tell powerful stories, so it is a perfect platform for the narrative. Alan Esslemont, head of content for BBC ALBA, was engaged as executive producer and embraced the concept whilst giving some valuable advice from the offset.

Honeyballers is an ambitious project in that it is telling an historical story whilst bringing the history of the game into a contemporary context that is both relevant and entertaining. It seeks to inspire its audience to follow the Scottish national players in their quest to qualify for the women’s World Cup in 2015.

Admittedly, I’m a bit of a geek in this area, so I have a good historical insight; however, this is not a history documentary in its purest form, this is a factual entertainment programme that uses the past to illustrate the framework of today’s key figures, so it was important to construct a narrative that was inspirational and engaging, as well as informative.

In short, Honeyballers is the compelling story of Scottish women’s football and its determined fight for survival. While it undoubtedly recounts a story of adversity and discrimination, it is also, hopefully, a reflective and empowering narrative that is about inspiring role models. It is about remarkable women across a broad passage of time.

I wanted to make sure that the ‘look’ of the programme mirrored the ‘feel’ and, by this, I mean that the contributors, and characters recreated in reconstructed drama sequences, had to have a visible impact, they have strong voices, and poignant stories to tell and I wanted all these elements to be encapsulated in the way they appeared on screen.

To that end, it was important not to tell a linear story that would disconnect the present with the past.

The narrative unfolds in a non-linear way that best illustrates the common ground between the icons of yesterday and the icons of today. There has been an amazing array of strong, empowering women in the development of women’s football in Scotland and they are connected by virtue of their passion and determination. In understanding the role models of the past in the context of the figureheads of today, the story becomes alive and we can see the extent to which the past is still continuing to shape the present day game.

Female footballers in Scotland are focused and inspiring and, as an entity, they form a strong social community with the overriding objective of bettering themselves as players and developing the game for the good for all. Shooting the interviews in such a way that gives all the ‘characters’ status and a personal voice, illustrates that connection. This programme isn’t about one particular event, it presents something akin to a movement and that emotion is hopefully captured in the production.

In terms of programme production, this was a very small team. I was producer/ director / researcher and sometimes interviewer!

My colleagues, Jenny Forbes and Sara Jack (assistant producer and production co-ordinator) worked really well with me to co-ordinate the whole programme; Jenny even went on a Scotland national team trip to Germany to gather material on my behalf. 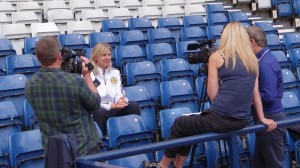 Neil MacConnell was main camera and Alex O’Henley, someone well-known to football in Scotland – is the programme narrator and reporter.

The executive producers were Alan Esslemont from BBC ALBA and Allan MacDonald from purpleTV. Both offered advice and didn’t seem to get too bored with my incessant chatter about amazing historical characters in women’s football.

Honeyballers was shot in HD on EX1s and was cut on Final Cut 7 by Steven Meechan.

Steven is really creative and did some terrific work on creating stings, titles and isos using motion graphics that really illustrate the ambition to give each of the contributors and characters a unique voice.

The programme was given its lovely polished look in grade using an Avid Symphony Nitris DX system where a ‘film-effect’ was added. The sound was dubbed on Pro Tools.

What have been the main production challenges?

Aside from working out the best way to tell 200 years of history in an hour, the biggest challenge was probably how best to illustrate the historical elements of the narrative in an engaging way that kept to the overall aim of the programme, which was to be informative and entertaining.

Maggie Taylor, BBC ALBA’s schedule manager, and I agreed that the best transmission time for the programme would be to tie in with the channel’s live coverage of the FIFA Women’s World Cup qualifying campaign. Great idea, but it did put a bit of pressure on the production schedule as it meant our filming period cut across the women’s summer break.

We got there, though, and managed to go to Germany, Sweden and London, and various places in Scotland, to get all the material required. 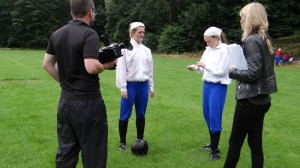 We had some great help from the women’s football community to find ‘players’ to recreate the football drama scenes from the 19th and 20th century. We also then had the task of making costumes that were of the time and as accurate as possible. Jenny has become a dab hand at dyeing clothes!

On the day of the shoot, which had to be an all-or-nothing day, because of a really tight shooting schedule, it was pouring with rain. It was quite a challenge for the cameras and crew, and, of course, our wonderful contributors, but we got there in the end and thankfully achieved what we set out to do.

There’s always a challenge in sourcing archive but we managed to get some great material and, of course, make use of our drama reconstructions.

I enjoyed the experience immensely. This is an astounding story and it’s one that I’ve been wanting to tell on screen for an incredibly long time.

I was very excited when I learned that Honeyballers was to be commissioned! 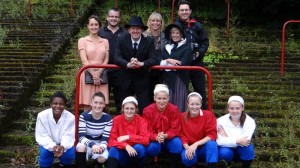 Once again, I think BBC ALBA deserve credit for having the ability to recognise a good story and for giving strong narratives such a firm presence on the channel. It’s a real privilege to have the women’s story told on this platform and to be part of a programme that is both hopefully inspiring and aspirational is just great.

When you’re writing on paper, every word has to count. Onscreen, every second has to be visual and engaging and have a reason to be there.

My first draft timeline was two hours long but it was so much fun to create something powerful from something that is already strong. The story of Scottish women’s football is remarkable and my biggest fear was that it would be difficult to do it justice in an hour. But I think Honeyballers does achieve that goal.

At purpleTV, we’re committed to storytelling, and doing this in a way that is energetic and innovative. It’s a theme we’re carrying through into our next programme… coming soon!