‘CYBERCRIMES with Ben Hammersley’ is a new, six x 30-minute series broadcast in the UK on the BBC News Channel and globally on BBC World News, from Saturday and Sunday for six weeks.

“Cybercrimes with Ben Hammersley is majority-funded and co-produced by the Open University and produced by Tern.”

Who commissioned the series?

The series was commissioned by Caroline Ogilvie at the Open University and Mary Wilkinson at BBC World News. After broadcast, the series will form part of the OU’s technology syllabuses.

Explain the thinking behind the programme’s ‘look and feel’

Cybercrime is fast becoming the biggest single threat to modern life on our planet so it’s a story that needs to be told.

But how do you bring this virtual world to life? Cybercrimes, by their very nature, happen with people typing on a keyboard and looking at a screen.

It’s the reason why cyber stories on TV have been such a hard sell – the audience quickly tires of seeing endless hackers tapping away. Boring stuff.

This series solves that by underpinning each episode with a fantastic cybercrime heist, or real crime story, where Ben becomes a detective unravelling the key moments and travelling the world to interview criminals and crime busters.

We’ve transformed the arcane language of code into something gripping and dramatic.

Glasgow-based graphics company, Play Dead, are integral to the series, with their animated 3D recons and tongue-in-cheek sensibilities.

The presenter, Ben Hammersley (pictured below), has spent his life immersed in technology – he came up with the word ‘podcast’ back in 2004, and he’s advised the UK government and various global, high-security organisations on cybercrime issues. 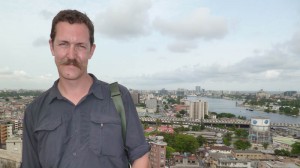 He also used to be a BBC reporter. He’s been on our radar for a while.

When BBC World News and the OU said they were interested in finding a way to make cybercrime work all I had to do was play marriage-maker, with Ben as my bait.

Watching the series, it’s hard to believe this is his documentary TV debut – there’s something slightly anarchic and irreverent about his delivery, but it’s all backed up by rock-solid research. He doesn’t talk down to the audience – you feel like you’re learning trade secrets.

Meanwhile, series director, Will Aspinall, has been working with Tern in Glasgow on and off since 2003 and I knew he would be a good fit – among other things, he invented a new clock and his cousin is none other than the man who invented the worldwide web, Tim Berners-Lee! Like all modern television schedules, the turnaround on this was pretty tight, but Will managed to juggle scripts, a global shoot and fit a new baby into his schedule with verve.

And the director of Photography, Seamus McCracken, is another talent – with a strong relationship with Tern.

Between Ben, Will, Seamus and the rest of the team, they’ve produced something truly special and of immediate and long-lasting relevance.

Seamus used the Canon C300 as his main camera, with a variety of lenses including an 8mm that produced some of the more distinctive fish-eye shots. The interviews were cross shot with a Canon XF305 and, on occasion, a Go-Pro Hero 3. The offline edits used Avid Media Composer.

Beyond translating these stories from the laptop to the small screen, the stories themselves were both legally and logistically tricky.

In the opening ‘Darknets’ episode, we feature someone being tried just before the episode airs, so we had to be very precise about the main aspects of the case.

For the ‘Scams’ episode we track down two scammers who were prepared to talk on camera and the crew had to follow a car to a secret location in Lagos, Nigeria – all very cloak and dagger. The interview itself is, however, eye-opening – I haven’t seen such a candid interview from people causing such harm to their victims and the reputation of their country.

Perhaps the most ambiguous incident happened in Washington DC for the ‘Surveillance’ episode, which looks into the implications of Edward Snowden’s revelations. The crew accidentally took a wrong turn and found themselves at the back entrance of the National Security Agency or NSA – the largest intelligence-gathering agency in the world! After two hours of questioning by an agent, who called herself ‘Erin’, the team were released.

Two days later, the crew were unwinding in a Georgetown bar when they were approached by men who said they were from the FBI. They bought the guys more drinks without asking – and yet they weren’t drinking theirs. Needless to say our intrepid team shook them off with a late night taxi ride across town, and we’ll never know who, why or what this encounter meant!

We’re all obsessed with new technology, and the internet is this entirely new world. We’re witnesses and participants in something that has changed absolutely everything – how many hours do we spend each day typing or sliding our hands across the glass of a smart phone?

Well, criminals have adapted to this world too, and so have our governments. 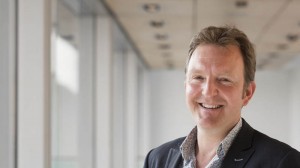 There are these huge issues right under our noses that we approach in this series – has cybercrime led to a fall in violent crime? Is internet privacy a right we should cherish? Are governments entitled to collect all our data? Are nations threatening to bring down the power grid of a major city at the push of a button?

I’m really proud that Scotland has made a timely contribution to a cultural phenomenon that is only in its infancy, and that we have introduced the new talent that is Ben Hammersley to a global audience of millions via BBC World News.