“The eight-part series, which will air from Monday 18th May at 2000, is produced by Waddell Media for STV and UTV.”

WELL-known former newspaper editor (and regular writer on allmediascotland.com), Bill Heaney, has collaborated on a project to the line the walls of a hotel with pages from its very own newspaper.

The Dumbuck Times is the brainchild of Bill and former journalist-turned-PR-person, Petra McMillan, whose family own the refurbished Dumbuck House Hotel, in West Dunbartonshire. 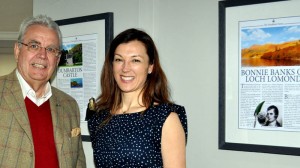 Heaney is a former editor of the Lennox Herald and was a special adviser to former First Minister, Henry McLeish.

McMillan, meanwhile, joined DC Thomson as a school leaver at 17, and worked for its titles, The Courier, The Evening Telegraph and The Sunday Post – as a news reporter and, briefly, as a sub-editor.

She then joined PR firm, Beattie Media, working her way up from account manager to director.

FIFTEEN workshops – including two on careers in film and digital marketing – are being staged at the annual conference of the Association for Media Education in Scotland.

The event – taking place on the 13th of next month, in Stirling – is being promoted, thus, by the organisers: “Are you into media? Across Scotland more and more teachers and learners are getting into media, a development which is long overdue, but one which is driven by the wide availability of mobile digital devices as well as the multimodal definition of literacy in the Curriculum for Excellence.

“To effectively teach media requires some knowledge of media theory as well the creative practices used by media professionals.”

OUT right now: the latest national-newspaper-sales-in-Scotland figures… See our feature, The Media in Figures, on Monday.

« Know How – Sports Marketing: Martin Reynolds: It’s time to get engaged
The Media in Figures: National newspaper sales in Scotland »