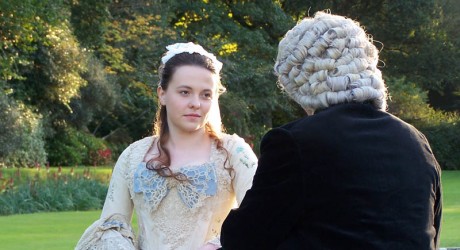 THE issues raised by a multi-award-winning documentary production, ‘Written by Mrs Bach’, are being reflected in a CD by a well-known cellist.

Says a spokesperson for the documentary film’s makers, Glasgow Films: “The film, first shown on BBC4 in March 2015, sets out the case for Anna Magdalena Bach as the composer of some of J.S. Bach’s most well-known and seminal works and is narrated by renowned Glasgow-based composer, Sally Beamish.”

The film’s director, Alex McCall, said: “The theory certainly has its detractors, but there is solid support from other high-profile professionals.”

Among the supporters is Italian/Japanese cellist, Attilia Kiyoko (Tilly) Cernitori, a former winner of First Prize for Cello and Medal of the President of the Republic in Rome.

She is believed to be the first professional musician in the world to release the world-famous Cello Suites on CD under the authorship of Anna Magdalena Bach – watch a YouTube clip here.

Tilly confesses she was inspired by the Glasgow Films documentary and the book by Professor Martin Jarvis from the Charles Darwin University in Australia.

All profits from the CD will go to ‘Women against Violence’, her local centre in Florence for women who have been abused.

She said: “I thought the story of Anna Magdalena was a bright example of the spiritual counterpart of the physical violence against women.

“A subtle, silent violence that often oppresses and denies women to express their talents. A message of hope from the city that gave birth to the Renaissance, hoping for a new Renaissance with gender equality.”

Other ‘Anna Magdalena’ concerts are planned for Brisbane and Perth in Australia.

Tickets are currently on sale for a narrative concert of ‘Written by Mrs Bach’ at the Royal Festival Hall in London in September with Aled Jones and Myleene Klass.

If successful, the concert will tour the rest of the United Kingdom and at venues in Scotland’s major cities.

The scientific team of Martin Jarvis and Heidi Harralson intend to present their findings on eyesight and handwriting, relating to J.S. Bach and first revealed in the documentary, at an International Symposium of Forensic Document Examiners next month, and, if accepted, will add to the growing body of evidence for his wife, Anna Magdalena.

Executive producer of the documentary, Pamela Kaufman, said: “The use of forensic science to unlock history has been mind-blowing and has truly vindicated Professor Jarvis’ theories.”

Robert Beedham, writer/producer at Glasgow Films, confessed: “It was no easy task converting a 600-page academic PhD thesis into a film, but it seems to have worked.”

So much so that the accolades continue to pour in.

Alex McCall, the director/producer of the documentary picked up the Best Director (Documentary) Award at the St Tropez and Nice International Film Festival in the South of France only last week – now the production’s third major International prize – including gold at the ‘World’s Best TV & Film Awards’ in Las Vegas last month.