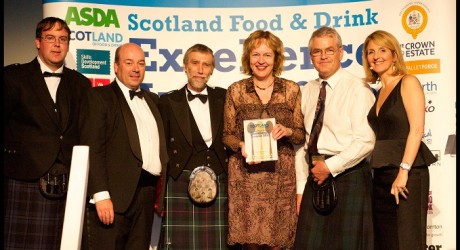 AN alliance between Orkney researchers and a distillery on Islay has been recognised in the Scotland Food and Drink Excellence Awards.

Academics at the University of the Highlands and Islands’ Agronomy Institute, based at Orkney College UHI, worked with Bruichladdich Distillery to develop a new whisky using Orkney Bere barley.

The collaboration between the Orkney Institute and Bruichladdich Distillery picked up the Innovation Award at the 2015 Scotland Food and Drink Excellence Awards.

The winners were announced by broadcaster, Kaye Adams, at a ceremony at the National Museum for Scotland in Edinburgh on Wednesday 27 May.

The award recognises the work that has gone into creating a new product using an ancient crop.

Says a spokesperson: “Bere was once a staple barley grown throughout Scotland for use in baking, beer and whisky. It fell out of favour when higher yielding, easier-to-grow varieties became available and is now only grown by a small number of farmers in the northern and western isles.

“Believing that its survival could be helped by finding new markets, the Agronomy Institute started to collaborate with distilleries and breweries in 2004.”

Dr Peter Martin, director of the Agronomy Institute, explained: “We wanted to demonstrate that old crops can still be very valuable to today’s companies.

“The development of new markets for such crops allows farmers to earn an income from growing them and helps to ensure their on-farm survival. This is important for conserving them as a genetic resource and allows them to continue to adapt to changing conditions.”

Dr Martin is delighted that the collaboration has received a national accolade. He said: “It is exciting to win and very satisfying, after many years of collaboration with Bruichladdich distillery, to have this work recognised.

“It shows that the belief which both the distillery and the Institute have always had in the potential of this ancient Scottish crop was well-founded.

“The award is a great credit to both organisations and also to the Orkney growers who have helped us supply the crop to Bruichladdich. In the Year of Scottish Food and Drink, it seems particularly appropriate to see Bere, a traditional Scottish staple, again being recognised by the industry.”

Distillery manager, Allan Logan, said: “We are increasingly fascinated by the results of our exploration of barley variety and provenance at Bruichladdich, and it gives us great pleasure to see the work we have been doing over the past decade with Peter and his team at the Agronomy Institute being recognised in this way.

“It has not been easy. There have been significant logistical, technical and operational hurdles to overcome but the deliciously unique single malts we are now producing from Bere are a credit to everyone involved.

“We look forward to working together with our partners on Orkney for many years to come.”