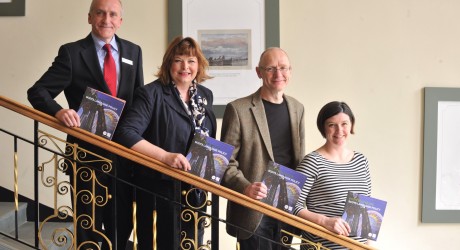 CREATIVE Scotland is today publishing its first Scots Language Policy, underlining the organisation’s commitment to supporting the language through its own work and the work that it funds across the arts, screen and creative industries.

A key element of the policy is the creation of the role of Scots Scriever, a first for Scotland, and a joint initiative between Creative Scotland and the National Library of Scotland.

This role, open to applications from today, will be a two-year residency, based at the National Library of Scotland supported with funding from Creative Scotland.

The purpose of the role of Scots Scriever will be to produce original creative work in Scots, its variants and dialects, across any art-form, as well as raising awareness, appreciation and use of Scots across the country and amongst all parts of the population.

Creative Scotland’s Scots Language Policy was published today at an event hosted by the National Library of Scotland and attended by Fiona Hyslop, Cabinet Secretary for Culture, Europe and External Affairs and the writer and Scots publisher, James Robertson.

Fiona Hyslop, Cabinet Secretary for Culture, Europe and External Affairs, said: “The Scottish Government’s ambition is for the Scots language to be recognised, valued and use in Scottish public and community life.

“The Scots language is an essential part of Scotland’s distinctive culture and heritage, and the Scottish Government takes seriously the promotion of the Scots language throughout Scotland in all its regional and local variants.

“In adopting this policy, Creative Scotland acknowledges the contribution the Scots language has brought, and continues to bring, to Scotland’s rich culture and heritage, in a country with over 1.5 million Scots speakers.”

James Robertson said: “I welcome this strong statement of commitment and intent from Creative Scotland. It recognises Scots both as a part of the identity and daily life of hundreds of thousands of people, and as a special national cultural asset.

“I hope this policy encourages creative individuals and organisations throughout the land to engage with Scots in all kinds of ways.

“This is not about looking back, whatever the language’s past achievements: it is about ensuring that Scots goes forward to be seen and heard in the future.”

Jenny Niven, head of Literature, Publishing and Languages at Creative Scotland, said: “We have provided support for Scots across a range of art forms for many years now including literature, theatre, music and film.

“What this policy does, however, is provide focus for our efforts to support the language in all its variants and dialects, generating a sense of renewed energy and intent. We are particularly pleased to be working in partnership with the National Library of Scotland to host the new Scots Scriever role which will further support the work to support Scots undertaken by us and many other organisations.”

Dr John Scally, National Librarian at the National Library of Scotland, said: “We are delighted to be working with Creative Scotland in creating this exciting new writing role, as part of our continuing commitment to the Scots language.

“Our collections are rich in Scots and include some of the earliest examples of written Scots through to writers such as Robert Burns, Hugh MacDiarmid and, in more recent times, Irvine Welsh.”

Details on the Scots Screiver role including how to apply can be found here: http://www.nls.uk/scriever-residency

The role of Scots Scriever is jointly supported by Creative Scotland, with funding of £50,000, and the National Library of Scotland who will host the role, provide administrative support and access to their Scots archive.

This is a unique type of writer residency with a high level of public engagement, a creative response to Scots collections at the National Library of Scotland, and regular ongoing output in Scots all required throughout the tenure.

The purpose of the Scriever residency is specifically: