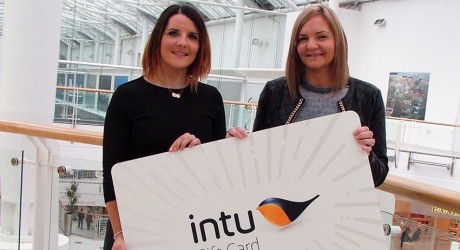 BIG-hearted Tracy Dunn has raised tens of thousands of pounds for charities and good causes over the years.

But now it’s her turn to spend some money on herself – thanks to all her fellow-fundraisers and the intu Braehead shopping mall.

Tracy, 35, from Castlemilk, in Glasgow has won a nationwide Big Treat contest run by intu after she was nominated as someone deserving of a special treat.

The fitness instructor and mum-of-two had already won the intu Braehead heat, which had a prize of a £200 gift card.

But Tracy then went on to win the most votes nationally for her charity work and has now been presented with a £2,000 gift card.

For the past ten years Tracy has been tirelessly raising money herself and encouraging others to join her in her efforts for cancer charities and other local good causes.

Tracy recruits her mini army of fundraisers mainly from the women who attend her fitness classes, in Castlemilk and over the years they have done everything from running road races in fancy dress to dancing outside a supermarket.

A modest Tracy said: “It’s fabulous to have been nominated and then go on to win the intu Big Treat prize, but I don’t see that I’m doing anything special. I know I’ve raised tens of thousands of pounds for charities over the years, but I wouldn’t have been able to do that without the help of others people.

“It only takes up some of my time organising and taking part in the charity events and if you can do something to help people, then you should do it.”

Tracy was nominated by her friend Lynn O’Brien, also from Castlemilk, who said:
“Tracy is so kind-hearted and always goes out of her way to help others.

“We’ve told her that she’s to spend the £2,000 prize gift card on herself as she certainly deserves to treat herself.”

Marketing manager for intu Braehead, Lydia Brown, said: “Our Big Treat contest was all about paying tribute to people like Tracy, who go the extra mile for others and she’s certainly a deserving winner.