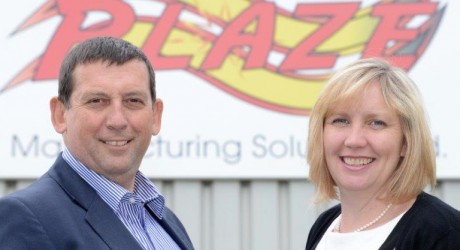 IN a fast-paced, testing and often volatile environment, the oil and gas sector relies on innovative thinking and elative product design to keep it moving forward in the 21st century.

Improving safety practices for workers and the problem of underwater infrastructure eroding are just two of the many challenges the industry face, many of which can be time consuming and costly to address.

Therefore, the sector relies on innovative firms flying the flag for entrepreneurial and effective solutions to ensure it thrives, survives and strives for improvement; thus securing a prosperous future for all.

Three North-east firms are blazing the trail for innovative product design that provide forward-thinking answers to everyday challenges presented in the industry and each have now been recognised in the finals of the Elevator Awards 2015, organised by Elevator, along with headline sponsors RBS – Ahead For Business, in the Grampian Award for Innovation category.

The award will be given to an individual or a business that can demonstrate that innovation is at the core of their current or future success.

Here, we look at the finalists, and their innovative equipment designed for the oil and gas sector:

Blaze has pioneered the development of the Flameshield 300 Flexible piping system, which is an alternative to the traditional hard pipe systems that are utilised throughout the oil and gas industry and fire protection industries.

With traditional piping materials yielding 75 per cent of their strength at circa 450°C, and hydrocarbon fires that generate from 650°C to 1400°C, Blaze recognised that there was a gap in the market.

Blaze determined that the solution needed to be jet fire resistant, blast resistant, corrosion resilient, required a 25-year design life and eliminated hot working during installation; and this inspired the firm to develop the Flameshield 300 Flexible piping system.

Blaze works to sustain the life of a platform with minimal disruption for its clients, and Blaze can carry out work on a platform without the need to stop production, which makes the Flameshield 300 piping system a unique proposition.

Xtegrity – The Equalizer Flange Integrity System was developed in response to a global, industry-wide problem in the oil and gas sector.

Designed and developed in Aberdeen, it is considered a world first, which provides an unique new solution for dealing with heavily corroded or degraded bolts in flange joints on offshore and onshore installations.

Corroded bolts cause a number of issues. Uncertainty about the integrity of flange joints is a major safety concern and traditional methods of dealing with this can result in loss of production and high costs.

Corroded bolts are a particular factor in ageing assets such as those in the North Sea because many flange joints are now operating beyond their original design life.

Xtegrity’s innovative design takes a completely new approach to the problem by taking away the need to remove corroded bolts, ‘replacing’ them instead with a new set of bolts which clamp round the outside of the flange and are held in place with an ingenious floating frame.

In addition to providing a significantly safer system of operation, Xtegrity brings considerable cost and time savings to the industry in the current economic climate.

Through innovative design, Divex has counteracted an industry-wide problem for the oil and gas sector in the development of a solution to the ‘stranded diver’; in the practice of deep saturation diving, which has been done to support oil and gas infrastructure for the past 40 years.

Divers live in pressurised chambers on surface support ships, and transfer daily to their working depth in diving bells.

Technology in this field has progressed and safety has been dramatically improved; and to by Divex’s solution for the ‘stranded diver’.

Rebreather technology is used commonly in military and technical sports diving and involves a process of capturing and reprocessing the divers exhaled breath, thus greatly extending the duration from a small volume of stored breathing gas.

The diver exhales into a bag called a counterlung. From the counterlung, his exhaled gas passes through a ‘scrubber’ – a chemical bed which removes carbon dioxide from the breathing loop.

At the typical depth or 150 metres described above, the new COBRA rebreather will provide a diver with 45 minutes of breathing gas, greatly extending the potential rescue envelope and allowing the diver a much higher chance of surviving an incident.

Issued by Frasermedia Ltd on behalf of Elevator.