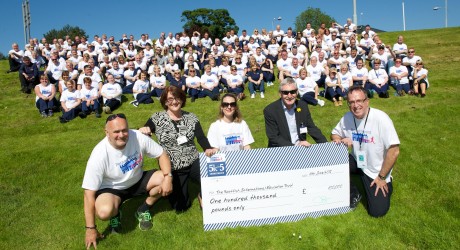 SCOTCH whisky and gin producer, Chivas Brothers, has marked a special day in the calendar of parent company, Pernod Ricard, by making a £100,000 donation to the Scottish International Education Trust (SIET) at its Kilmalid site in Dumbarton.

The donation was made on Responsib’ALL Day – Pernod Ricard’s global day of action on responsible drinking – which is celebrated by 19,000 group employees, worldwide.

The company staged ‘village fete’-style events throughout the day at five of its sites – Mulben in Keith, Hammersmith in London, Paisley, Dalmuir near Glasgow and Kilmalid in Dumbarton.

Employees took part in a range of physical and educational activities, learning about the five Global Alcohol Industry Commitments*, while undertaking cycling, walking, rowing and skipping challenges to cover a distance of 8,000km collectively.

The 8,000km target is based on 5km per employee – a challenge that was set by Pernod Ricard.

As an added incentive at Chivas Brothers, employees were advised that a sizeable donation would be made to SIET if the company target was reached by 5pm.

SIET has two broad aims: to give financial help to Scots men and women who wish to take their studies or professional training further in circumstances where public funds are not available; and to support projects which will contribute to the cultural, social or economic well-being of Scotland or the improvement of the Scottish environment.

It was set up in 1971 on the initiative of Sean Connery.

SIET trustees and patrons are Scots who have distinguished themselves in careers including the arts, industry, education and sport – such as Sir Jackie Stewart and Sir Menzies Campbell.

Laurent Lacassagne, chair and CEO of Chivas Brothers, said: “This year, we decided to take Responsib’ALL Day a little further, by giving something back to the people of Scotland with this donation to a very worthwhile cause.

“Our employees embraced the challenge enthusiastically, reaching our 8,000km target while learning about some important commitments for our industry.

“We are very proud of this collective achievement, and hope our donation will make a real difference to the development of Scottish people, giving them greater access to education and training.”

SIET chair, Ginnie Atkinson, said: “All the trustees of SIET – including our founding trustees, Sir Sean Connery and Sir Jackie Stewart – are very grateful to all the team at Chivas Brothers for this generous contribution.

“It means that we can very significantly increase the support we offer to talented young Scots over the next three years.

“It is a really positive way for Chivas Brothers to contribute to Scotland and the young people who are Scotland’s future.”

*The five Global Alcohol Industry Commitments were announced in 2012 and are presided over by IARD (the International Alliance for Responsible Drinking).

Signatories are the 12 leading global producers of beer, wine and spirits.

Chivas Brothers is the Scotch whisky and premium gin business of Pernod Ricard, the world’s co-leader in wines and spirits.

The portfolio also includes two of the world’s leading English gins – Beefeater, the world’s most awarded premium gin, and Plymouth gin – plus a selection of highly acclaimed single malt whiskies, including Aberlour, Longmorn, Scapa, Strathisla and Tormore. The range is completed by a collection of blended Scotch whiskies which includes 100 Pipers, Clan Campbell, Something Special and Passport Scotch.

SIET was established in 1971 on the initiative of Sir Sean Connery, who contributed his fee for the film, ‘Diamonds Are Forever’, to the Trust’s initial capital.

The purposes of the Trust reflect Sir Sean’s belief in the power of education and training to transform lives. He was supported in establishing the Trust by Sir Jackie Stewart and both Sir Sean and Sir Jackie maintain an active interest in the work of SIET.

The main focus of the current trustees is helping talented young Scots who have shown promise in a particular field to access education and training opportunities at postgraduate or equivalent level that will help them realise their potential.

Often, this will mean studying or training abroad. The many young people helped by SIET have shown excellence in a wide range of disciplines including academic subjects, performing arts and sport.

MEDIA RELEASE issued by Chivas Brothers. You too can post your story ideas for journalists (aka press or media releases), on allmediascotland.com. Email here for more information.