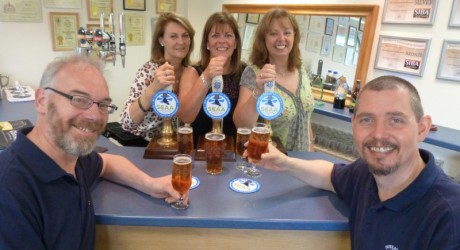 INVERALMOND Brewery, one of Scotland’s independent craft-beer breweries, has today raised a high-flying toast to a brew that is set to put some fizz into the fundraising efforts of Scotland’s Charity Air Ambulance (SCAA).

Launching the beer from the comfort of their custom made bar at the brewery, managing director, Fergus Clark, was joined by SCAA’s head of fundraising, Sally Cameron, and Joyce Leslie, a trustee of the charity, to formally ‘wet the head’ of the new partnership.

And with 5p from every pint sold in participating pubs, there is potentially a lot to celebrate for the Perth-based charity which has responded to over 600 emergency callouts across Scotland since it was launched.

Head of fundraising, Sally Cameron, commented: “We are delighted with this new partnership and we can see Inveralmond Brewery’s support will bring the life-saving charity into sharp focus in venues across the country.

“Not only will the 5p per pint donation prove a tremendous boost to our funds, but the exposure through Inveralmond’s wide and respected network of pubs and bars will also help spread awareness of the charity.

“We hope people enjoy their pint knowing that they are helping keep our much-needed service in the air. Today, we raise a glass in celebration of them and Inveralmond Brewery for their generous support.”

An out-pouring of support for the charity brew has already started from Scotland’s on trade community, with venues in Perth, Edinburgh, Glasgow and Aberdeen already tapping into the latest fundraising gesture.

Fergus Clark, managing director at Inveralmond Brewery, said: “The SCAA Charity Beer has been very well received by our trade customers and we’re delighted with the early initial uptake of the charity brew which we are sure will be a hit with Inveralmond beer fans across Scotland.

“With 5p in every pint going to the charity, whose work is truly exceptional in serving the medical emergency needs of Scotland, it gives new meaning to responsible drinking. We’re delighted to be helping make a tangible difference.”

To find out more about The Inveralmond Brewery, visit www.inveralmond-brewery.co.uk

Opened on 14th May 1997, the Inveralmond Brewery is an expert craft brewer of a range of beers including Lia Fail, Ossian and Thrappledouser. Situated at the very heart of Scotland, in Perth, the brewery nestles between the fabulous rolling hills of Perthshire, the mighty Grampian mountain range and is surrounded by crystal, clear rivers, providing inspiration and nourishment for the beers it produces and exports around the globe.

Here is a list of outlets, all Edinburgh based, that are stocking the SCAA Charity Beer: