Media Release: Gary Delaney, the master of the deadpan one-liner, to headline in a brewery 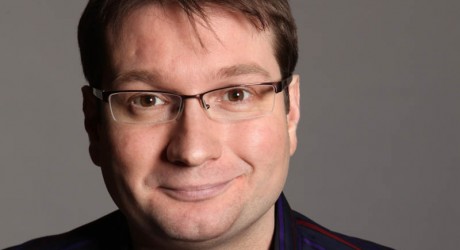 THE unremittingly vicious comic, Gary Delaney, is bringing his razor-sharp one-liners to Glasgow on Friday 17 July when he headlines Gilded Balloon Comedy at Drygate.

This grand master of the comedy circuit has a cavalcade of brilliantly inventive puns in his armoury.

As well as being a Mock The Week regular, Gary Delaney is widely regarded as being the most quotable comic on the circuit. His hugely impressive collection of exquisitely-crafted quickfire gags will leave the west of Scotland audience struggling to remember them all.

The gangly and good-natured funny man, Chris Forbes, and the Perthshire sheep and beef farmer-turned-talented comedian, Jim Smith, will join Gary Delaney in the Dyrgate line-up.

Glasgow-based comedian Scott Agnew, a born storyteller who could make a shopping list entertaining, will host the evening’s entertainment.

Chris Forbes is a critically-acclaimed Scottish stand-up comedian, actor and writer. His conversational, laid back and playful style gives him a likeable onstage persona and his acting background (coupled with his 6’2” stature) helps him to command the stage.

He may well take to ranting bitterly about the youth of today, the difficulties he faces in finding a comfortable pair of size 13 shoes and the pressures he faces to settle down, get married and have kids. Chris supported Kevin Bridges on his 2012 UK tour.

“…the likeable and confident comic’s relatable and affable banter has the crowd onside from the get-go.” ThePublicReviews.com

It’s town-meets-country for Jim Smith, a 2014 finalist in The Gilded Balloon’s So You Think You’re Funny competition. Using a varied range of characters, regional accents and impressions, with the occasional sheep-based pun, he tells tales of living and farming in rural Scotland and gives the audience an insight on how this north country boy sees the outside world.

“An interesting and funny addition to the comedy circuit.” – Chortle

As compere for the evening, 6’5” powerhouse Scott Agnew’s easy-going, laid back delivery and friendly approach to stand-up will lull the Glasgow audience into a false sense of security before he spins yarns of general misadventure, mixing tales of nightlife, etc that will both shock and have them laughing uncontrollably.

“A cross between a Roman Coliseum and the X Factor.” – The Scotsman.

Gary Delaney has also appeared on Dave’s ‘One Night Stand’, Comedy Central’s ‘The Comedy Store’ and ‘Comedy Blue’, and on Channel 4’s ‘Robert’s Web’. He has written for many TV programmes including 8 Out of 10 Cats, Mock the Week, 10 O’Clock Live, A League of Their Own and Stand Up for the Week.