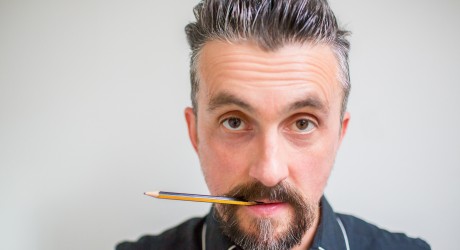 Birdman will treat Glasgow to a taster of his whimsical journey through the struggles, joys and woes of family, fatherhood and the coming of age; all integrated with his own twisted cartoons and reworked fairytales.

He might even touch on lost loves, his rebellious upbringing in a religious household and broaching the subject of sex education with his kids.

Markus Birdman is an uniquely talented and versatile comedian; the all-round package.

He’s witty, controversial, hip, topical, infectious, likeable, laid-back and silly; as well as being a master of timing and physical comedy.

He will be joined on the Drygate Brewery stage by musical comic and mother of three, Ria Lina; and Limerick comedian and hand model, Karl Spain.

Billy Kirkwood, a Scottish comedian with a huge bag of comedy tricks at his disposal and who likes nothing more than interacting with his audiences, will be the compere for the evening.

Ria Lina trained as an actress, singer and dancer before deciding to try her hand at stand-up comedy; and winning the EMMA Award for Best Comedienne in 2003.

She is a musical comic who makes a big impact with her dry wit and bawdy songs. Not for the faint of humour, she will tackle modern taboos such as racism, sexism and discrimination in Glasgow.

Ayrshire comic, Billy Kirkwood, has an ever-expanding cult following, thanks to his unique, yet slightly surreal, style of storytelling, likeable on-stage presence, energetic on-stage performances and near non-existent attention span.

His material is delivered with a dynamic drive that leaves audiences sore with laughter and is the perfect compere – a born improviser who loves interacting with his audiences.