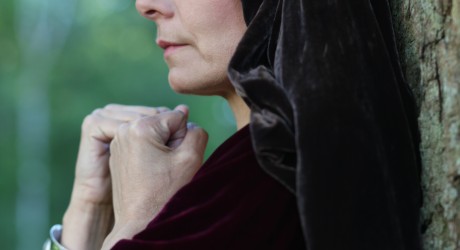 ACCLAIMED performer and storyteller, Xanthe Gresham Knight, cuts across the lines between storytelling and theatre as she debuts at the Edinburgh Festival Fringe with two shows.

Storytelling is an unique human skill shared between people, and is one of our oldest art forms. It brings words and the world to life, stimulates the imagination, and builds a sense of community between tellers and listeners.

“Speaks like a woman spitting jewels.” Phil Smith for Arts Council of England.

Morgana Le Fey and Paradise Bride, the final two instalments of her 8 Goddess Tales, bring a contemporary voice to ancient myths and tales, exploring themes from womens’ role in society to our relationship with the environment. Devised thanks to Arts Council Funding.

“A fine voice, pure and unforced Nick Hennessey’s fluid style and engaging presence is a winning combination.” THE TIMES

A two-hander by Xanthe Gresham Knight and musician and storyteller, Nick Hennessey, Morgana Le Fey is a new piece of story-telling theatre, exploring the myths and legends of the multi-tasking Morgana who features in the famous Arthurian tales.

From Merlin to Malory, Camelot to Excalibur, Morgana le Fey reigns supreme as fiendish counter queen to King Arthur and his Knights of the Round Table.

Playing by her own rules, she foils their… quests, dismantles the fragrant towers of each princess, and wreaks general havoc from the shadows.

Director, Juliet Forster, York Theatre Royal, believes the show is about the quest for love and finding the female voice.

“As sister, lover and foster mother to King Arthur, Morgana’s very human passions are rejected time and time again. As Queen, politician, working mother and sorceress, she tries to do it all and fails. Is she trying to do too much? It’s a perennial question.”

Nick Hennessey’s harp playing, luminous songs and theatrical defence of Camelot provide a feisty male voice that adds to the heart and humour of the show. “There has to be some redemption in the battle of the sexes,” he comments.

Paradise Bride, is the reworking of a previous story Her, commissioned by Glastonbury Festival for its Green Fields site in 2014 and is directed by Logan Murray.

To the Celts, Brigid was everything, Goddess of fire, healing and poetry. But where is she now? In search of Her, performance storyteller Xanthe Gresham Knight journeys through

the old tales… of Scotland, Ireland and much further afield, eventually channelling a 21st century Brigid.

Telling the story of online love, virtual reality and consumer addiction – by taking the identity of a mail order bride seeking a mate – Xanthe, performing as Brigid, smashes through a computer monitor.

Paradise Bride by juxtaposing modern technology with links to nature and myths of the land, asks us to consider our environment and love it more.

Xanthe adds, her message, “skyscrapers, newspapers and water vapours are all one. Paradise is now”.

And continues: “Whether you walk on the grass or on the pavement, loving the land starts with loving the stories it holds.”

Devised and performed by Xanthe Gresham Knight and Nick Hennessey

MEDIA RELEASE issued by Muckle Media. You too can post your story ideas for journalists (aka press or media releases), on allmediascotland.com. Email here for more information.