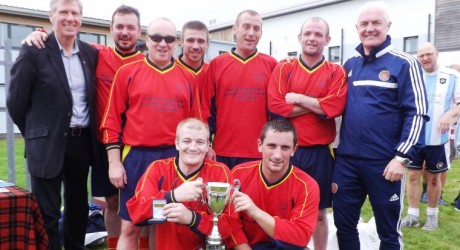 SPORT and exercise can make a positive difference to people’s mental wellbeing and World Suicide Prevention Week, which runs from 7 to 12 September, will be quite literally kicked off this Saturday (6 September) with the exciting five-a-side football tournament, The Choose Life Challenge Cup.

To celebrate the fifth anniversary of the Choose Life Challenge Cup, Hibernian Football Club has invited the tournament to use its Training Centre at East Mains, Ormiston, Tranent, in East Lothian.

The competition will run from 10am until 12.30pm and 16 teams from Edinburgh, Midlothian, East Lothian, West Lothian and Dundee will take part with the Edinburgh Pink Ladies making a welcome return.

Event organiser, John Murphy is the *SHARE (Suicide, Harm, Awarenes, Recovery and Empathy) project worker with Scottish charity, Health in Mind, and he explained that the tournament will have a mini-league format.

“The top teams go on to compete for the Choose Life Challenge Cup with the lower teams playing for the new Health in Mind trophy and one outstanding player receiving the Player of the Tournament Award,” said John.

John Murphy welcomes the declining trend but highlights that the suicide rate for males was more than two-and-a-half times that for females.

John continued: “Football offers a comfortable space for guys to get together; reduces isolation and promotes a sense of belonging.

“So many young men find it hard to talk about their feelings and the Choose Life Challenge Cup tournament provides a great opportunity for people to find out about the issues and the services available locally.

“If there’s someone you know who you think might be considering suicide; ask them and be willing to listen and encourage them to get help – you could help save their life.

“Alternatively, if you are feeling suicidal, don’t hide it; find someone you trust and talk to them.”

Keith Wright, the ex Hibs player, will be there to welcome everyone and the trophies will be presented by Iain Gray MSP, passionate Hibs supporter and chair of the Hibernian Community Foundation and Gwenn McCreath, chief executive of Health in Mind.

12.15 pm       Presentations of the Choose Life Challenge Cup; the Health in Mind Cup and the Best Player of the Tournament award

Playing for the Choose Life Challenge Cup and the Health in Mind Trophy.

• The Scottish Government continues to keep suicide prevention as a national and local priority and will continue to provide national leadership to reduce suicide and monitor the implementation of the strategy. Launched in December 2013, the new Suicide Prevention Strategy covers the period 2013- 2016 and builds on the work done to address death by suicide in Scotland and incorporates learning from experience, research and evaluation. http://www.scotland.gov.uk/Publications/2013/12/7616.

• We are encouraged that we are seeing the lowest numbers of deaths by suicide in Scotland since 1977 (based on old coding rules for comparison purposes).

• As a result of national and local partnership working there are now over 45,000 people trained in suicide prevention skills. Crucially, this includes one in every two health professionals working directly with the public in mental health services, primary care and Accident and Emergency.

• We recognise the ongoing problem of higher relative suicide rates among men, and through our national ‘Read between the lines’ campaign we have been encouraging those who are most likely to be in contact with people at increased risk of suicide to spot the signs of suicide; to ask about how they are feeling and; to direct them to further sources of support through Samaritans and Breathing Space helplines.

• Further statistical information on suicide can be accessed from the ScotPHO website http://www.scotpho.org.uk/home/Healthwell-beinganddisease/suicide/suicides_keypoints.asp.

• NHS Health Scotland has been leading the National Programme for Suicide Prevention on behalf of the Scottish Government since 2008.

• For information on what do if you are worried someone is feeling suicidal, and to download ‘The Art of Conversation’, a free guide on spotting the signs, starting a conversation and being a good listener, visit www.chooselife.net/ask.

MEDIA RELEASE issued by Health in Mind. You too can post your story ideas for journalists (aka press or media releases), on allmediascotland.com. Email here for more information.