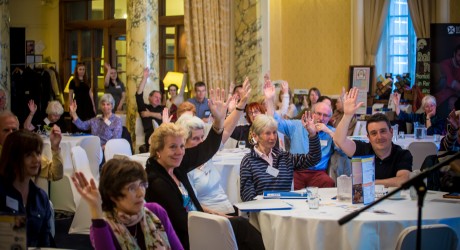 THE Scottish Fair Trade Forum held its annual conference on the 5th September at the Golden Lion Hotel in Stirling, and Fair Trade campaigners, supporters, businesses and organisations from across Scotland were invited to attend.

The conference had a focus on how Fair Trade supports smallholder farmers and also acted as a platform for Fair Trade campaigners from local Fairtrade Towns groups to meet, discuss and exchange ideas.

Over 80 people travelled to Stirling for the occasion, and there were several speakers, such as Malcolm Shannon, managing director of JTS, and Kevin McCullough, head of Campaigns at the Fairtrade Foundation.

Keynote speaker Kenny Ewan, CEO of WeFarm, gave an introduction to ‘the internet for people without the internet’.

WeFarm is a pioneering social enterprise that launched a peer-to-peer knowledge-sharing platform for small-scale farmers in rural communities in Africa and Latin America. It provides a service for producers to ask questions addressing anything that can improve their lives, from farming techniques to business ideas. As this was WeFarm’s first event in Scotland, there was huge interest among the attendees.

Several breakout sessions and workshops took place after lunch, including an introduction to the World Fair Trade Organisation’s Guarantee System and an update on the co-operation between the R&A and the St Andrews Fairtrade Steering group regarding The Open 2015, where all tea, coffee, hot chocolate, sugar and bananas supplied throughout the Championship were Fairtrade.

There were sessions addressing the future of Fairtrade as well as how Fairtrade Towns groups can generate income and keep track of their funds.

Martin Rhodes, director of the Scottish Fair Trade Forum, said: “It’s amazing to have such a great diversity of Fair Trade campaigners and supporters at this year’s conference.

“People of all ages and from all across Scotland came together today to exchange ideas and engage in a common cause.

“This is a very important day of the year for the Forum and we are pleased to see such activism and enthusiasm.”

Kevin McCullough, head of Campaigns at the Fairtrade Foundation, said: “This was the second time I’ve been invited to join the Forum’s Conference as a speaker and it’s always very exciting to be engaging with active supporters of Fair Trade.

“Campaigning remains crucial to the work of Fairtrade, and it helps to have a positive impact on millions of farmers and workers around the world.”

The Scottish Fair Trade Forum was founded in 2007 to help Scotland become one of the world’s first Fair Trade Nations, which was achieved in February 2013. Through its work with other Fair Trade bodies in the UK and beyond, the organisation engages directly with many Fair Trade groups, schools, universities, local authorities and others to support ongoing fair trade activity and encourage it to grow stronger.

The World Fair Trade Organization (WFTO) is a global network of organisations representing the Fair Trade supply chain. Membership in WFTO provides Fair Trade organisations with credibility and identity by way of an international guarantee system, a place of learning where members connect with like-minded people from around the world, tools and training to increase market access, and a common voice that speaks out for Fair Trade and trade justice – and is heard.

WeFarm is ‘The internet for people with no internet’ – a pioneering social enterprise, launching a peer to peer knowledge sharing platform for small-scale farmers in rural communities in Africa and Latin America. Providing a service to ask questions addressing anything from farming techniques to business ideas that can improve their lives.

The Fairtrade Foundation is an independent non-profit organisation that licenses use of the FAIRTRADE Mark on products in the UK in accordance with internationally-agreed Fairtrade standards.

A Fair Trade Town is any community in which people and organisations use their everyday choices to increase sales of Fair Trade products and bring about positive change for farmers and workers in developing countries. To become a Fair Trade Town, a community needs to meet certain goals that are set and monitored at national levels. Some Fair Trade Town schemes are led by national members of Fairtrade Labelling Organisations (FLO) International, while others are managed and supported by a coalition of organisations working together to promote fairer trade practice and policy e.g. WFTO, Fair Trade USA and Oxfam.

MEDIA RELEASE issued by Scottish Fair Trade Forum. You too can post your story ideas for journalists (aka press or media releases), on allmediascotland.com. Email here for more information.