Media Release: Clyde ‘get shirty’ for football fans across Glasgow and the west 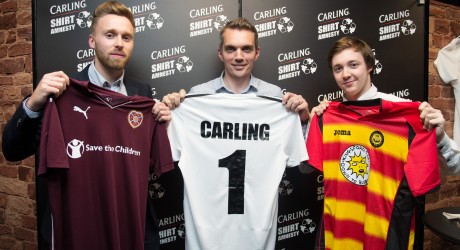 Over 400 football fans were given the chance to exchange their old club strips for new ones, whilst a lucky 80 were invited to appear on a special Superscoreboard live studio broadcast.

To get fans ready for the new season ahead, Carling’s Shirt Amnesty crew hit the road with Superscoreboard’s very own Gordon Duncan cropping up at three locations in and around Glasgow on the 25th and 26th August to swap fans shirts free of charge.

To round up Carling’s Shirt Amnesty week, supporters of the ‘Beautiful Game’ won exclusive competitions to visit Radio Clyde’s studios near Glasgow which were transformed for the night into a Carling Sports Bar.

Guests were invited to take part in the one-off show, enjoy a pint and pie and chat with the pundits about their hopes for the season ahead, whilst gleaning some footie wisdom from the experts.

Reporting on all the shirt-swapping action – courtesy of Clyde’s ‘man in a van’ – the team broadcast the exchanges live on air as Carling handed out new shirts to the fans in exchange for their old ones.

Supporters were also offered custom prints via the van’s on-board printer, allowing them to add their own name or that of a favourite player – plus number.

McCulloch, host of Clyde 1’s Superscoreboard programme, said: “We’re chuffed to be a part of the initiative this year and to see so many fans turn up to get kitted out in this season’s gear.

“The show really was bigger and better than ever and Carling did a superb job transforming our canteen to help generate a big football night atmosphere, helped by Clyde’s regular expert pundits and brilliant listeners.

“We love talking all things Scottish football with so many loyal and dedicated fans each and every night on Superscoreboard, and this special show gave us the unique chance to chat with some of these fans face to face.”

Jill Todd, sales director at Radio Clyde, said: “This year’s Carling Shirt Amnesty has been a huge hit in Glasgow and the West and Radio Clyde is proud to have worked alongside Carling to deliver such a great campaign.

“Football fans are the lifeblood of the sport and the chance to host a live broadcast in front of a live audience was a great way to get even closer to our listeners.”

Julie McGraw, marketing manager for Carling in Scotland, said: “We brought the Carling Shirt Amnesty to Scotland to excite the nation’s many football fans and our partnership with Superscoreboard proved to be the perfect platform to do just this.

“Our Shirt Amnesty team were overwhelmed with the positive response each event received and it was truly fantastic to see so many Scottish football fans take part in the campaign. We will be donating all the old strips to charity.”

The Bauer Radio total portfolio reaches 16.5m million listeners every week (31 per cent of all adults in the UK), providing great opportunities for any business to successfully advertise their campaign on radio. Our portfolios give marketers the freedom to create customised advertising packages utilising the individual portfolios, or a combination of both, depending on the objectives of the campaign. Brands seeking to engage and appeal to consumers emotionally will find value in the Bauer Passion Portfolio, which appeals on the basis of lifestyle choice. Alternatively, Bauer Place will offer brands the chance to engage personally with loyal, local communities in specific geographical locations.

Gerry McCulloch (middle) with two shirt-swapping competition winners on either side.