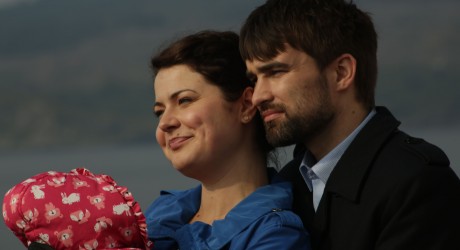 In its seventh year on screen, BBC ALBA is building on existing success by bringing viewers another exceptional season of programmes covering all genres from factual documentaries to drama, comedy, music, sport and children’s favourites.

‘Jim Baxter’, produced by the award-winning purpleTV, tells the story of ex-Rangers FC and Scotland midfielder’s career as it soared and then fell sharply as his lavish lifestyle impacted his performance on the pitch.

It also examines the devastating event that impacted on Baxter for the duration of his life, his adoption as a baby and the lifelong feelings of abandonment. Norma Morton, partner of the late Jim Baxter, one of Scotland’s greatest footballing legends, offered an insight into an intimate film which examines his personal and professional life, as never told before.

His work and life story will be told in a new documentary, titled ‘Jolomo’, which explores not only his art but his faith, where his painting and preaching are inextricably combined.

His many versions of the Black House on the Strand are hard to miss and his work appeals to the masses, generating over £2million in sales each year, which he uses to support many Scottish charities.

Celebrating 30 years of the iconic Gaelic children’s programme ‘Dòtaman’, the man himself, Donnie MacLeod, spoke at the event on the success of the brand and the cult status he has gained amongst generations of Scottish audiences, as reflected in the new ‘Trusadh: Dotaman’ documentary special.

Chris Young, producer of BBC ALBA’s drama series, ‘Bannan’, previewed five new episodes in the series as well as announcing a further ten episodes for 2016, delivering a total of nine hours of drama to BBC ALBA.

Bannan follows Màiri and Alasdair’s story as they move to the island, but when Alasdair is reluctant to sever his links with the city, a deep, dark secret jeopardises their relationship.

Margaret Mary Murray, head of Service for BBC ALBA, said: “We are delighted to bring viewers such a rich package of programmes this autumn from powerful documentaries to light-hearted comedy, popular children’s series and live sports coverage, illustrating the breadth of productions we have coming onto BBC ALBA over the coming months.

“Over the past seven years, BBC ALBA has established itself as a favourite with audiences regularly attracting 700,000 viewers each week and over the past year BBC ALBA programmes have had over seven million views via the BBC iPlayer.

“We hope to continue to build on this success by delivering high-quality programmes which audiences in Scotland and further afield love.

“Our contribution to the creative economy is also significant with BBC ALBA now producing more than 600 hours of programmes per year for broadcast in Scotland and commissioning content from 22 independent production companies as well as the BBC and STV.”

Highlights from BBC ALBA’s schedule over the autumn season include:

BBC ALBA is delivered through the partnership set up between the BBC and MG ALBA, the Gaelic Media Service, an unique broadcasting partnership providing a successful public service.