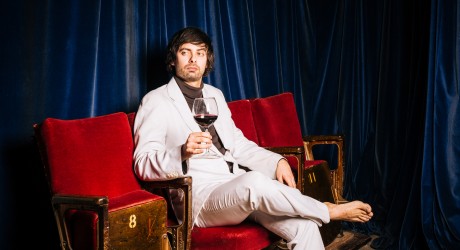 MARCEL Lucont, the multi-award-deserving French comedian, is travelling to Glasgow to headline Gilded Balloon Comedy at Drygate on Friday 23 October 2015, where he promises to charm the women and mock the stupid; such is his unassailable Gallic arrogance.

Adopting a status higher than Mont Blanc, philosopher, poet, lover and bon vivant, Marcel Lucont will spend the best part of his set on his two favourite subjects: himself and how much better than you he is.

The self-centred alter-ego of Alexis Dubus, Marcel Lucont has toured the world with his dry wit, bawdy chansons, literary sophistication and exquisite sex poetry. Now, he is making a special trip to the ‘Second city of The Empire’ and promises that every one in the audience will have their life enriched by this experience.

Marcel was named the best sketch, character or improv act in the recent 2015 Chortle Awards, a year after being nominated in the same category.

He was winner of the 2012 Amused Moose Award for the Best Comedy Show of Edinburgh Fringe and the 2013 Fringe World Award for Best Comedy.

The charismatic yet deadpan Irish comedian, Michael Redmond, will join Marcel Lucont on the Drygate stage.

With his wearily detached demeanour, classic observational material and beguiling everyday surrealism, Redmond consistently delivers a masterclass in the art of comic timing.

He expertly drops sudden and unexpected one-liners with polished aplomb. However, he’s probably most recognisable for his role as the lightning-hit Father Stone on Father Ted.

Making up the Friday line-up will be the West Lothian comedian [Living in England], Fern Brady, fresh from her first solo show at the Edinburgh Fringe and seething about the idiotic.

A former mental health worker, journalist and stripper, the caustically forthright Brady with a distinctively gravelly voice, whose material maintains its dark tinge and risqué subject matter, isn’t hesitant in describing comedy as an industry for “ambitious psychos”.

She made the final of So You Think You’re Funny at the Edinburgh Fringe in 2011 and the finals of the Piccadilly Comedy Club new act competition in 2012.

Billy Kirkwood is an Ayrshire comedian with an ever-expanding cult following. As a born improviser who likes nothing more than interacting with his audiences, Kirkwood is the perfect compere for the evening.

He has a huge bag of comedy tricks at his disposal, including an unique yet slightly surreal style of storytelling, a likeable on-stage presence, energetic on stage performances and a near non-existent attention span.

His material is delivered with a dynamic drive that leaves audiences sore with laughter.

For further information on Gilded Balloon Comedy at Drygate, go to: http://www.gildedballoon.co.uk

Gilded Balloon Comedy at The Studio at The Festival Theatre, Edinburgh – Saturday 7 November at 20:30