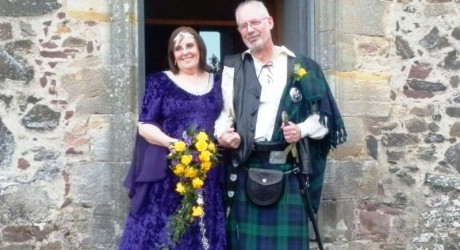 SEVEN years ago, Jacqui Donachie’s life came to a shuddering halt. Her 33 year-old son, Iain, passed away after struggling with schizophrenia since his mid-teens.

One person who attended the funeral was an ex-colleague of Jacqui’s, Gordon Peerless. They had worked together for 13 years until Jacqui left to work in the community.

Following the funeral, Gordon got back in touch with Jacqui to offer support and as the weeks became months and then years, their friendship developed into love.

Despite his illness, Iain had a great generosity of spirit and consequently had a very close circle of friends; friends who celebrated with Jacqui and Gordon when they married at Neidpath Castle on 3 October.

Amongst those friends were Karen and Dave Duncan, whose daughter Erin was Jacqui’s Flower Girl and it was Dave who walked Jacqui down the aisle

Gordon explained that, as they were merging two households to live in Penicuik, they certainly did not need any extra toasters.

“We decided to ask our friends to make a donation to a charity that would have been able to help Iain when he took ill and after some really extensive research, we decided that Health in Mind was the organisation we wanted to support,” said Gordon.

Jacqui and Gordon approached Health in Mind and community fundraiser, Katherine Sellar, was moved by their story and asked how she could help.

“Jacqui handed me a lovely photograph of Iain and a colleague designed a special ‘thank you’ card using the photograph with text explaining the charity of their choice,” explained Katherine.

Each of the 40 guests received a card and when the wedding took place on a beautiful autumn day, Jacqui was delighted to be able to donate £600 to Health in Mind, in memory of Iain.

“I honestly felt that Iain was at the wedding and in the following week, on the way to hand over the donation to Health in Mind at their Shandwick Place office, we visited St John’s Church in Lothian Road to light a candle for him,” said Jacqui.

“A lady in the church saw the collecting box with Iain’s photograph and asked us about it.

Iain’s generosity of spirit continues through his friends and family. When everyone got together for a Bonfire Night party, close friend Jo Henderson made the suggestion to Jacqui and Gordon that on the first anniversary of their wedding, Ian’s friends and family should get together to raise more money for Health in Mind in Iain’s name.

Plans are already afoot to do a zip wire challenge in 2016.

Everyone who knew Iain is quite certain that he would not only approve of trying to help others but that he would also have had a good laugh with them as well.

Health in Mind was set up in the 1980s and was formally known as the Edinburgh Association for Mental Health with the aim of taking over flats which were then rented for ex-patients by the Royal Edinburgh Hospital.

Today, the organisation still provides housing as well as many other services which include trauma counselling, befriending services, respite for carers, information services and community based services. The organisation delivers services on behalf of NHS health boards and some local authorities.

MEDIA RELEASE issued by Health in Mind. You too can post media releases (aka press releases) on allmediascotland.com. Email here for more information.

Health in Mind · Charity and the voluntary sector · Edinburgh and East (postcodes EH, KY and TD)