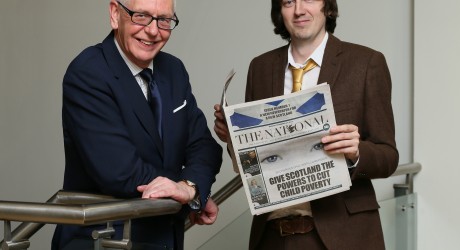 SCOTLAND’S new, pro-independence daily newspaper, The National, will celebrate its first birthday on Tuesday 24 November – with a special anniversary edition and exciting additions to its regular content.

The newspaper and its website, thenational.scot, has confirmed that its audience continues to grow.

The National’s paying readership averages 14,000 while the website receives an average of 370,000 unique users every month, with more than 6 million page views over the last six months.

With strong figures and a powerful presence on Facebook and Twitter, The National is confident it can continue to expand and engage its audience sustainably.

To celebrate the paper’s first birthday, the special edition will include a review of the year’s highlights with editors discussing the making of their favourite 15 front pages from the last year. Pro-independence figures such as Nicola Sturgeon, Alex Salmond and Patrick Harvie have also contributed individual messages of support to celebrate the paper’s one year milestone.

Personal letters of thanks from campaign groups and charities such as Zero Tolerance, Close the Gap and the Child Poverty Action Group will also be included, highlighting how the newspaper has helped by giving them a voice to raise awareness for their causes.

Consultant editor to The National, Richard Walker, who also founded the paper, said: “We asked Scotland if it wanted a new pro-independence daily newspaper, and the resounding answer was, and continues to be, yes. After a roller-coaster start and incredibly busy year covering such a range of events, I find it hard to believe we’re already here, celebrating the newspaper’s first birthday.

“Our survival shows the appetite for a daily newspaper written from the perspective of support for Scottish independence. We are told endlessly that Scottish journalism has no future and that print is dead. Hopefully the success of The National represents a challenge to that argument.

“Our one year anniversary is testament to the dedication of a great team of journalists. But most of all, it stands as a tribute to the incredible support we receive from our readers, which was overwhelming on day one and has remained so ever since.”

The National has taken a stand on the refugee crisis and the effects of austerity as well as having led the constitutional debate. It has given substantial space to international news and the triumphs of women in sport, and has supported high-profile campaigns on equality for women and fair pay.

Callum Baird, the editor, said: “It has been a whirlwind first year, in which we’ve had the good fortune to report on some of the most historic events in Scotland’s history, with an obvious highlight being the SNP’s landslide general election victory.

“We have never had a more informed electorate, and it is our responsibility to provide the news, views and information to keep Scotland invigorated by discussion, and maintain the energy of the referendum debate as we head into Holyrood elections and a decision on the UK’s future in Europe.

“Our website’s audience and our social media influence is increasing as more people realise that, although we go against the grain in supporting a pro-independence viewpoint, we also offer an alternative view to other newspapers on other key issues facing Scotland, such as the refugee crisis, fracking and gender equality.

“Where many newspapers are cutting back and offering fewer pages, our plans for 2016 are to add pages, increase the variety of content and offer even more value for money.

“Journalism has become about meeting the audiences where they are, whether this be in print, online or social media. Having started from zero, we now have 370,000 visitors every month coming to our website as well as 14,000 paying readers. It really has been a privilege to serve them.”