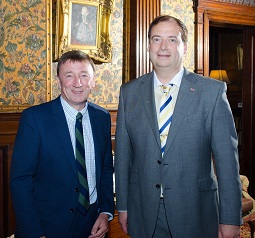 THE Grampian-Houston Association (GHA) has announced two key appointments which will play an integral role in further developing the organisation’s presence on both sides of the Atlantic.

Following a two-year period as vice-chair, local businessperson, Brett Jackson, has been appointed chair of the Association, with Aberdeen City Council director, Gordon McIntosh, to take on the role of vice-chair.

In addition, Aberdeenshire, Provost Hamish Vernal, has been named as president and Aberdeen Lord Provost, George Adam, as vice-president.

The Grampian-Houston Association was formed in 1979 following the official twinning of Grampian Region and the City of Houston.

The group has a growing membership of than 60 and aims to enhance the Sister City relationship by promoting and encouraging business, social, educational and cultural links and exchange opportunities.

Aberdeen-born entrepreneur, Brett Jackson, is the founder and managing director of Granite PR which was formed in 2008 and signed its first US client in 2011.

Brett is also the creator of the popular annual Aberdeen-Houston Gateway business event which this year evolved into a week-long exploration of links and opportunities between the two world-leading energy hubs.

A graduate of Glasgow and Aberdeen universities, who began his career in accountancy roles, Gordon McIntosh is a director at Aberdeen City Council, having previously worked for the authority as director of economic development.

Commenting on his appointment to the position of chair, Brett Jackson said: “The Grampian Houston Association has 36-year track record of successfully exploring and developing civic, cultural, education, social and business links between the energy hubs of Aberdeen and Houston.

“I am honoured to take on the role of chair and will seek to add value, continue the good work the Association does and play a part in its future growth and development.”

Gordon McIntosh added: “I am delighted to take on the role of vice-chair.

“The relationship with Houston is fundamental to Aberdeen’s business sector and I am looking forward to working closely with Brett as chair to further our growing links with that city, as well as attracting new members to our Association.”

To find out more about the Grampian-Houston Association, visit www.grampian-houston.co.uk.