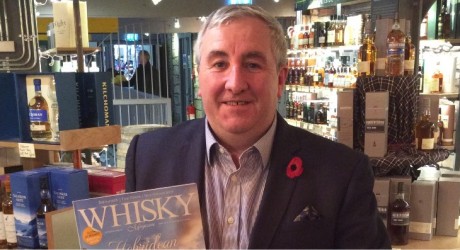 THE team at Castlehill Whisky, the new Edinburgh whisky retailer, are thrilled to be shortlisted for one of Whisky Magazines – 2016 Icons of Whisky awards.

The awards are one of the highlights of the industry calendar and celebrate the best people, places and businesses in the Scotch whisky industry.

Victor Spence, for the Gold Brothers, said: “Castlehill Whisky is located within the Tartan Weaving Mill right next to Edinburgh Castle and is a new addition to the retail offer on the Royal Mile by the highly enterprising Gold Brothers.

“Castlehill Whisky has a specialism in old and rare whiskies alongside its highly-regarded tastings room.

“The former water reservoir and now Edinburghs only working mill the Tartan Weaving Mill is the largest combined retail and visitor attraction on the Royal Mile and now hosts two of Scotlands biggest global cultural icons that of tartan and whisky.”

Graham Harvey, manager of Castlehill Whisky, said: “The nomination and shortlisting for this prestigious award are testament to the hard work that the team have put into this new outlet and the enduring support of the directors that have made it possible.”

Lully Gold, a director of Gold Brothers, said: “We are delighted to hear of the news of the nomination and shortlisting for an award at the 2016 Icons of Whisky Awards. We believe our new whisky shop has a very attractive offer for locals and visitors alike.”

The 2016 Icon of Whisky Awards will be announced at an industry lunch on 4th December at Surgeons’ Hall.

MEDIA RELEASE issued by vjks.org. You too can post media releases (aka press releases) on allmediascotland.com. Email here for more information.