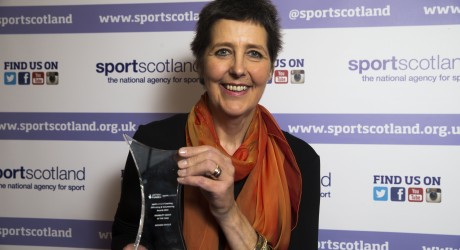 THE prestigious sportscotland Coaching, Officiating and Volunteer Awards 2015, were held on Wednesday 25 November, in Glasgow City Halls – where leading athletes congratulated the winners and thanked them for their work in supporting and developing sport in Scotland.

At the event, hosted by BBC Scotland’s Bryan Burnett, coaches, officials and volunteers involved in rugby, rowing, curling, judo, triathlon, equestrianism and gymnastics were recognised for the many hours they dedicate to helping others compete at the best level they can.

Stewart Harris, chief executive of sportscotland said: “Every year across the country, thousands of dedicated volunteers and coaches devote their time, knowledge and skills to help others achieve their sporting goals and we are delighted to have this opportunity to celebrate their achievements and congratulate them all on their achievements.

“At sportscotland, we are implementing a world-class sporting system at every level in Scotland and we can only do so with the support of the many dedicated coaches, officials and volunteers like those recognised this evening.

“I hope that many more people are inspired by their stories and recognise the opportunities that exist to get involved in sport at every level from volunteering at your local club or school to coaching or officiating on the world stage.”

horsescotland nominated Amanda Saville, who earlier this year won their own Coach of the Year Award, within the coaching category and she was awarded sportscotland ‘Disability Coach of the Year’.

Amanda, who is from Lockerbie, was recognised for her work in equestrianism at the Chariots of Fire Driving Centre and Sports Driving Unlimited.

Amanda coaches seven days a week and has created a dynamic, friendly environment where high quality coaching is delivered by her and her team.

Her coaching group involves people of all ages with a wide range of impairment.

Commenting on her achievement, Amanda said: “I started my career training for mainstream competing, but when I started to get children with disabilities coming along I switched my focus as I got so much joy and motivation from helping them develop.

“I have never accepted ‘no’ in my life and I don’t in my work either, people can achieve whatever they want to and solutions to overcome any problems faced can be found, no matter how unconventional they are.

“For the past three years I’ve been fighting cancer and so it is very much a team effort at Chariots of Fire. I am so thrilled and honoured to have received the award and delighted that equestrian sports has been recognised. It makes me want to work harder, learn more and encourage wider participation!”

Chair of horsescotland, Ronnie Young, MBE said: “We are delighted that Amanda has been recognised by sportscotland following her success at the horsescotland Awards, for her commitment to coaching within equestrianism and especially increasing opportunities for children with disabilities.

“As well as all the coaching Amanda does, she has worked tirelessly with a carriage manufacturer to develop a carriage that can fit a wheelchair in it, thus ensuring that even more people can access the sport.”

A trophy, certificate and £300 to use towards her professional or coaching development were awarded to Amanda on behalf of sportscotland.

As well as this, Amanda will also receive a year’s free access to the new horsescotland coaches register, which enables the equestrian sector access to qualified and insured coaches.

horsescotland is the national organisation for all equestrian sports and activity in Scotland. The vision that we share with our members is:

To enable those in our sport and sector, by supporting their development, to excel in what they do best…

The key outcomes for Scottish equestrianism are to:

MEDIA RELEASE issued by horsescotland. You too can post media releases (aka press releases) on allmediascotland.com. Email here for more information.