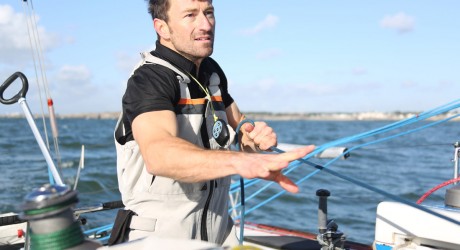 THE legendary Vendée Globe is one of the world’s wildest and most extreme sporting endurance events.

It is a non-stop, single-handed race around the planet in the most technically-advanced ‘IMOCA 60’ yachts and takes place every four years.

It starts and finishes on the French Vendée coast and means around 78-90 days and 27,600 solo miles sailing non-stop and unassisted.

Simply getting to the starting line is a major achievement. Completing the race a triumph. Winning is the dream.

A team led by Phil Sharp, who is one of Britain’s most successful offshore sailors, is chasing that dream.

The Vendée race starts in 11 months time and their plans are coming to fruition now.

While accepting that headline sponsorship of the team is way beyond their capabilities, Islay-based Bruichladdich Distillery have offered to help with preparations and communications in a small, but exciting way, as Phil attempts to set a new ‘End to End’ benchmark in the coming days in what promises to be extreme conditions.

Begins a spokesperson: “There is no established record for sailing the length of Britain, from Land’s End to John O’Groats. Running, walking, cycling, playing golf, yes; sailing? No.

“Swimming? Well that is another part of the story. As soon as he heard about Phil Sharp’s plans to sail the length of the UK, the extreme sportsman and adventurer, Sean ‘The Beard’ Conway, called him up and asked if he could join the crew.

“Sean is recognised as the only person to have swum the route – between April and November 2013 – because, having also run and cycled he wanted to add to his Land’s End – John o’ Groats record collection. It is a mere detail that Sean is a non-sailor who admits he suffers seasickness. Solo racer, Phil, will need to fast =track Sean’s sailing skills to a decent level over the pre-start days.”

Adds Phil: “It will be a pleasure and inspiration to have Sean along. Most of the racing I do is solo and so I have no technical worries about having Sean aboard. He is as hard as nails and I am sure that I can enhance my own endurance capacity learning from a Zen master like Sean.”

Both will be tested to their limits because they are embarking in a few days time – in mid-winter.

“We will be setting a benchmark which I think many will go on to challenge, simply because it is a great, mainly downwind, fast route.

“However this will also be part of the training and conditioning for the Southern Ocean which is where I aim to be at Christmas next year during the Vendée Globe.

“Sailing in mid-December on Scotland’s most northerly coast, along the Pentland Firth and around Cape Wrath, are some of the most hostile waters in Europe, certainly as cold and malicious at times as the Southern Ocean.”

Phil’s race boat for the Vendée Globe is not available for the Land’s End – John o’ Groats Challenge and because of its 4.5m draft could not enter the harbours of the NE Scotland.

So a high-performance Class 40 racing boat (smaller than the Vendee boats) has been chartered which will be delivered to Falmouth ahead of the record attempt.

This will be an opportunity to train Sean and teach him the ropes.

The team will be on standby for the record attempt any time after the 6th December, and will leave as soon as the right weather window presents itself.

The weather is likely to be very challenging. They will be aboard an awesomely fast racing machine powered by nothing but the elements. There will be risks. It is going to be very wet, very cold and very wild.

And, remember, December means long, long hours of darkness and short days. And Bruichladdich are going to be there with them. In spirit, anyway.

Bruichladdich PR spokesperson, Carl Reave, said: “’Laddiefans’ who have been lucky enough to experience the exhilaration of sailing boats in big winds will understand the sensory overload it creates, and why we want to be involved and why we want to help tell this story.

“We are not quite sure how we are going to do it just yet, because communicating with the yacht as it hurtles northwards will be challenging, but we are going to have a go.”

News reports on progress will be made available to media on www.philsharpracing.com               www.bruichladdich.com and on on Twitter @Phil_Sharp_and @bruichladdich

MEDIA RELEASE issued by Bruichladdich. You too can post media releases (aka press releases) on allmediascotland.com. Email here for more information.