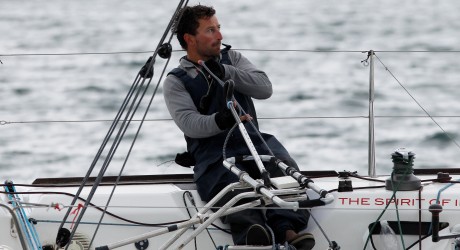 THERE are established records for walking, for cycling, for running, even for playing golf continuously the length of Britain. But so far, there is no reference for sailing non-stop from Land’s End to John o’Groats.

Phil Sharp, the Jersey-based British yachtsman, who is in the very final stages of preparing a challenge for the famous Vendée Globe non-stop solo race around the world, plans to establish a reference time.

Sharp, who established himself as one of Britain’s best solo ocean racing talents when he won the Route du Rhum transatlantic race in 2006, aims to start the 620 miles passage this Sunday or Monday and anticipates taking around 55-60 hours.

The Land’s End to John o’Groats challenge passes through some of northern Europe’s most notorious water, culminating in the Pentland Firth on the north coast of Scotland, the final hurdle before John o’Groats.

Sailing through the long hours of darkness and in the strong, bitterly cold winter winds will be ideal training for the Southern Oceans of the Vendée Globe which starts off the Vendée coast of France in less than one year.

The end-to-end challenge is being facilitated by Bruichladdich, the progressive Highland distillers whose Islay distillery they will pass as an important milestone at just over half-way.

Sharp is being accompanied on board the Class 40 yacht by the indefatigable Sean ‘The Beard’ Conway who wants to add to his remarkable ‘triathlon’ of feats spanning the length of Britain.

A confirmed non-sailor, Conway’s skills will be fast-tracked this week on the delivery passage from Gosport to Falmouth. Also on the team is boat owner, Alex Alley, an experienced ocean racer who plans to break a round-the-world record on his Class 40 in the near future.

“It will be a pleasure and inspiration to have these guys with me,” Sharp enthuses.

“Most of the racing I do is solo and so I have no technical worries about having Sean aboard even if he is a non-sailor. He is as hard as nails and I am sure that I can enhance my own endurance capacity learning from a Zen master like Sean.

“We will be setting a benchmark which I think many will go on to challenge, simply because it is a great, mainly downwind, fast route.

“However, this will also be part of the training and conditioning for the Southern Ocean which is where I aim to be at Christmas next year during the Vendée Globe.

“Sailing in mid-December on Scotland’s most northerly coast, along the Pentland Firth and around Cape Wrath, are some of the most hostile waters in Europe, certainly as cold and malicious at times as the Southern Ocean.”

Sharp’s race boat for the Vendée Globe is not available for the Land’s End – John o’Groats Challenge and because of its 4.5m draft could not enter the harbours of the NE Scotland, anyway.

So, a high-performance Class 40 racing boat has been selected as the best option.

He concludes: “For this record attempt, the timing will be crucial. At this time of the year, there are relentless, fast-moving depressions sweeping in from the west, so we have to wait for the right one to come along and catch it at exactly the right time.

“To be as fast as possible, we want the wind direction ideally to be SW’ly and we need strong winds… but not too much. If we time it wrong, we could end up in big seas that could really cause us problems.”

Phil Sharp will be raising funds for Brain Tumour Research.

Donations can be made at www.justgiving.com/PhilSharpRacing to fund research.

“We wish him all the best in his epic voyage.

“Sadly, Phil’s experience of losing a parent to a brain tumour whilst still a child himself is by no means unique and until we find better treatments and ultimately a cure for brain cancer, families will continue to lose loved ones, often well before their time.”

Follow the Energy Challenge End to End on Bruichladdich and Phil’s Social Media:

Phil will be available for interviews in person:

In Gosport Marina from 11:00 – 13:00 Wednesday 02.12.15. Over the weekend, and in Falmouth on departure. Please contact Rebecca Linder to organise interviews on:

About the Vendee Globe Energy Challenge

The Vendée Globe is considered to be among the toughest sporting challenges in the world today. As the pinnacle of offshore sailing, the three-month race around the planet challenges skippers to compete in the world’s most hostile oceans alone and without assistance.

The Vendée Globe Energy Challenge aims to intrinsically bridge performance and sustainability through the development of a pioneering lightweight renewable energy system for the boat.

Through application of such technologies, the project aims to be the first vessel to circumnavigate the globe non-stop on zero emissions and to demonstrate the importance of clean energy innovations in a sustainable future.