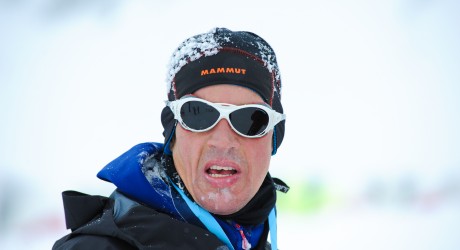 IT’S an extreme Marathon like no other but Paul Webb, based in Fife, not only completed the 2015 Antarctic Ice Marathon, he also managed to slide home in first place in a time of 3:35:25 – less than one minute outside the existing race record.

The annual 26.2-mile race – conducted in temperatures as low as -20 degrees Celsius – saw 50 runners from 19 countries wrap up in layers of thermals to compete in incredible conditions.

“It was a whiteout for much of the event and the low contrast made it difficult to see the running surface. It was a constant battle to find firmer ground to run on,” said Paul Webb after defrosting back in Scotland this week.

“In 2011, I ran my first Marathon in Marrakech, I was so poorly after the race from physical exhaustion I swore I would never run a Marathon again. So, to finish this race in first place in a time of 3:35:25 – less than one minute outside the existing race record, set by Petr Vabrousek, is incredible. It still hasn’t really sunk in.”

Paul Webb, originally from Newcastle but now living in Fife and a scientist at Sasol Technology based at the University of St Andrews, set himself the challenge of running seven marathons across seven contents to raise money for St Andrews based charity, Worldwide Cancer Research.

“I’m just a normal guy with no particular sporting talent. I now believe it is possible for anyone to achieve almost anything if you put your mind to it. All that is required is dedication and determination.”

Paul decided to undertake a challenge with a global theme, to help raise awareness and funds for the charity as they are the only UK charity funding pioneering cancer research worldwide.

With his first marathon back in April 2014 in London, Paul has run marathons in New York, Australia, New Zealand, China, Rio and even the Marathon des Sables – known as the toughest race in the world.

“It has been a remarkable journey; I’ve been fortunate to visit some amazing places and have met incredible people along the way. I have been so impressed by the scientists I have met in North America, Australia and New Zealand.

“All of them have an unparalleled enthusiasm and dedication to their work. They are passionate, inspirational people who want to make a difference in the world.”

Paul has raised over £25,000 for Worldwide Cancer Research. He is one of only 134 people to ever run the 26.2 miles distance on every continent.

MEDIA RELEASE issued by Worldwide Cancer Research. You too can post media releases (aka press releases) on allmediascotland.com. Email here for more information.