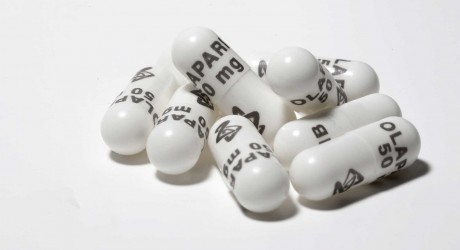 LAST Friday, the National Institute of Health and Care Excellence (NICE) approved (as noted, here) a brand new cancer drug for prescription on the NHS giving much-needed hope for some women with ovarian cancer.

Begins a spokesperson: “Olaparib is the first in a brand new class of cancer drug called PARP inhibitors.

“PARP inhibitors work by exploiting a defect some cancers have in a particular type of DNA repair. Because healthy cells don’t have this defect, olaparib is able to target and kill cancer cells more specifically than normal chemotherapy drugs can.”

One of the charities behind the development of olaparib is St Andrews-based Worldwide Cancer Research.

Dr Helen Rippon, director of Research, commented: “We have been waiting for this news for months.

“Ovarian cancer lags behind other cancers when it comes to the availability of modern, targeted treatments and the prognosis for women diagnosed with ovarian cancer is often poor.

“All cancer patients should be able to benefit from the most advanced treatments medicine has to offer, and we are relieved that olaparib will finally be available on the NHS in the UK.

“Olaparib is a brilliant example of how laboratory research into basic cancer cell mechanisms – in this case DNA repair – can lead many years later to a new cancer drug. Worldwide Cancer Research is proud to have played a part in that early development.”

And the spokesperson added: “Women with ovarian cancer who have had three rounds of conventional chemotherapy and who have a mutation in the BRCA1 or BRCA2 genes will be able to get olaparib.

“In clinical trials, olaparib extended the progression free survival of women with advanced ovarian cancer by an average of several months and some women benefited much more than this. It will also be used to treat women with fallopian tube and peritoneal cancers.

“The development of this pioneering drug goes back to the mid-1990s. Worldwide Cancer Research – then known as AICR – funded Professor Steve Jackson in Cambridge for a series of projects studying DNA repair.

“He used findings from these projects, along with others, to set up a company called KuDOS Pharmaceuticals Ltd. KuDOS went on to develop olaparib, a drug targeting DNA repair – labelled ‘first in class’. KuDOS was taken over by AstraZeneca in 2005, at which point AstraZeneca took over testing of the drug.”

Later, in the mid-2000s, Worldwide Cancer Research funded Professor Alan Clarke to test olaparib in a new mouse model of breast cancer. His work supported the case for using olaparib in cancers with BRCA mutations and helped olaparib on its way to clinical trials.

Olaparib is now in clinical trials for a wide range of other cancer types, including breast cancer, stomach cancer and pancreatic cancer.

“We will be paying very close attention to the outcomes, and as research progresses, we have every hope that in future, olaparib will prove to be useful in treating these other diseases as well,” concluded Dr Helen Rippon.

Worldwide Cancer Research receives no government funding and supports ground breaking early-stage research into any cancer type at some of the top research institutions in the world. In the last 35 years it has funded over £190 million worth of cancer research.

MEDIA RELEASE issued by Worldwide Cancer Research. You too can post media releases (aka press releases) on allmediascotland.com. Email here for more information.