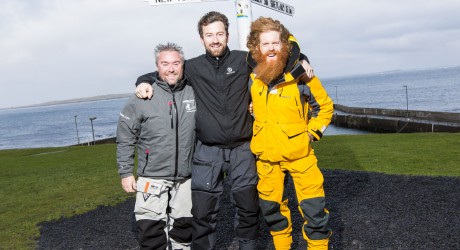 LOOKING exhausted but suitably elated, sailors Phil Sharp and Alex Alley – together, with adventurer Sean Conway – arrived into Scrabster harbour in the small hours of this Tuesday morning, having established the first-ever reference time for sailing from Land’s End to John o’Groats.

After leaving Lands End at 0855hrs Friday morning, the trio crossed the finish line off John  o’Groats at 2047hrs and 15 seconds last night to set the mark for the 620Nms most direct route course at 3 days 11hours 52 minutes and 15 seconds, averaging 7.39kts.

The trio left Land’s End at 0855hrs on Friday morning and enjoyed strong favourable winds until they reached the NE of Ireland. But since yesterday late afternoon and evening, they have had light winds which have been against them today.

Completing the Length of Britain challenge represents the first training outing for Jersey-based ocean racer, Sharp, who is looking to compete for the first time in the Vendee Globe solo, non-stop race around-the-world, starting next November.

For Conway, his return to John o’Groats – where he is now recognised in the street and is a local celebrity – completed an incredible fourth Land’s End to John o’Groats adventure, complementing feats of running, cycling and swimming.

Conway – a non sailor – confirmed that the 83 frantic, full-on hours of sailing were physically and mentally every bit as difficult as his 135-days swim which he completed in November 2013.

Instantly recognisable by his trademark flaming ginger hair and long beard, Sean Conway revealed: “One hundred and thirty-five days for the swim, 83 hours for the sail.

“This was is so much quicker but all the hardness, the difficulty is so much more compacted.

“They were both equally difficult but, with the sailing, it was non-stop.

“Swimming you have six hours a day of downtime and then jump back into the freezing waters again. But during those first 50 hours of this passage, if you had asked me to sail again in the future I would have said ‘definitely not, I am not cut out for this’.”

Sharp’s plan is to come back and better his inaugural record in the future as stage two of his training, sailing solo when he has his IMOCA 60 race yacht; but, meantimes, he is very happy with the level the trio – who had never sailed together on the Class 40 yacht before they started – achieved:

“I think the record ranks pretty close to what we hoped for,” Sharp said.

“You can only wait for so long for a weather window and it is difficult to judge at this time of year. You have these systems coming in from the Atlantic, hammering the coast in the winter, and so you have to be sensible about it.

“You can’t head off into a storm and take big risks. We had some windy days which we dealt with well. These conditions tested our teamwork and were demanding because we had not really been on a boat together before.”

One of Britain’s rising stars of ocean racing, Sharp contiunued: “It is amazingly satisfying to get here. We worked well as a team these last three days considering we had never sailed together before. And we did push the boat to its limit to establish this record.”

” I was keen to do this as training at one year before the Vendee Globe. And the fact that you spend so much time in the Southern Ocean then you want to get some training in similar conditions which are relatively accessible compared to having to go down there to train.

The weather here is similar. But I am keen to establish some new records and so an end to end record for Britain which had not been formally established was a feat I thought about. And I looked at it with Sean, who has done it a few times already – swimming, running and cycling.

“So it is great for him to achieve a fourth ‘discipline’.”

Describing the high and low points of the record, Sharp confirmed: “The high point was reaching into the Irish sea at 20kts not knowing how much wind there was really going to be.

“The low point was having to climb the mast to retrieve a halyard [the rope which holds a sail up] and that was in lumpy seas.

“So that was the most ‘interesting’ experience. But that was a risk you ahd to take to keep pushing the boat hard.”

Conway concluded: “It was one of the toughest three days of my life. Without a doubt. The things I do are down to my efforts and my outputs.

“This, sailing, I thought, ‘How hard can it be?’, but really it was physically tough. I wish I had done more push-ups for training. I had to winch Phil up the mast at one point and that was hard.

“I told myself all the time, ‘You will not be seasick, Sean’, and I was never really sick.

“When I swam around Britain, I was sick for the first week. And so this time I really vowed I would not be sick. I should probably have been sick and got on with it. But really it did, initially, take the edge off the enjoyment and being able to really learn from the start.

“That took the edge off the enjoyment for the first while. I am not a sailor and so I was just putting my trust in Phil and Alex to get me through. But it would have been good to have felt a bit better at the beginning.

“After about 50 hours, I started to enjoy it. I woke up and thought, ‘Actually this is quite okay’, and from there on I was on full-time, doing the tea duties and being the ‘deck boy’, making dinners. But I really enjoyed and made me remember I do love the sea. When I swam Britain, I fell in love with the ocean and the people and this environment.”