Media Release: Aladdin at Eastwood Park Theatre has the Glasgow banter – oh yes he has! 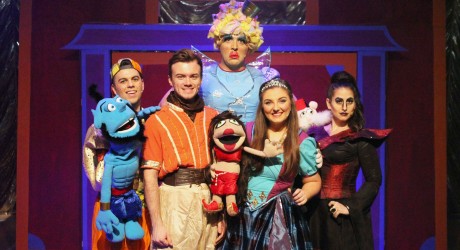 THIS year’s Aladdin panto at Giffnock’s Eastwood Park Theatre has a distinctly Scottish flavour – oh yes it has!

Then it’s revealed that Aladdin actually hails from Anderston, in Glasgow; Wishee Wishaw is from deepest Lanarkshire, and Widow Twankey is now a window cleaner in Chateau Lait – better known as Castlemilk.

Audiences will be surprised to learn that Aladdin’s lamp isn’t really of the traditional brass variety, but an old electric table lamp taken from a skip outside a council house in Drumchapel.

And for years, the lamp, with The Genie inside, has been hidden in a back room at The Shed nightspot, in the south side of Glasgow.

The panto staged by Insideout Productions, in association with Eastwood Park Theatre, runs from today, Wednesday, December 16 to Tuesday, December 22.

Also in the cast playing Jasmine is Jennifer Neil, who appeared in the stage version of Legally Blonde; Greig Adam, as Widow Twankey; Natalie Toyne, as Abanazaress and Andrew Grayson, who plays Wishee Wishaw.

And in another twist, puppets are used to play The Genie of the Lamp, The Slave of the Ring and The Emperor.

Artistic director for Insideout Productions, Paul Harper-Swan, who is originally from Giffnock, said: “I’m over the moon with the phenomenal professional cast we have for our Aladdin panto.

“We were at the Eastwood Park Theatre last year with The Pure Amazing Wizard of Oz panto and show went down a storm.

“It’s brilliant to be back and I’m excited to see what the south side audiences thinks of this year’s panto.

“Our take on Aladdin is rather different from the classic story and we’ve lots of singing, dancing, audience participation and since it’s set in Scotland, plenty of the good old Glasgow banter.”

Rikki Loney added: “I’m really excited to be back on my home turf playing Aladdin. Since leaving the X Factor, I have been gigging a lot and been really busy, but I can’t wait to get on stage and perform in panto.”

Sarah Angus, audience development officer for East Renfrewshire Culture and Leisure Trust, which runs Eastwood Park Theatre, said: “Our panto this year is already a success, even before the actors have put on the greasepaint or the footlights turned on.

“Most of our daytime shows are already sold out and tickets for the evening performances are going fast.

“So if anyone would like a fabulous evening’s entertainment of traditional panto humour, with a touch of the Glasgow patois thrown in for good measure – and not have to travel into the city centre – then they should book their tickets quickly.”

To book seats for the Aladdin panto, log on to www.eastwoodparktheatre.co.uk or call the Box Office on 0141 577 4956.