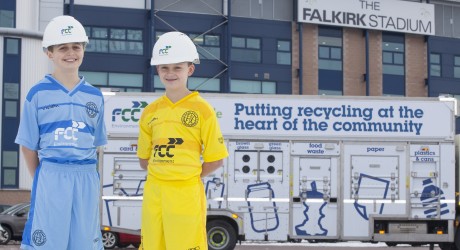 PLAYERS at Forth Valley Football Academy (FVFA) are now ambassadors for recycling, as part of a new partnership with one of the UK’s top waste resource management companies.

From this month the young players, from under-11s to under-17s, will proudly display the logo of FCC Environment on their season 2015-16 home and away strips.

The deal, which will start this month, was officially announced at Falkirk Stadium prior to the big game between promotion-chasing rivals, Falkirk and Hibernian. Falkirk FC technical director and FVFA ambassador, Alex Smith, welcomed the young players on to the pitch at half-time to pose in their new strips.

Jamie Swinney, FVFA head of operations, said: “On behalf of everyone connected to the academy, I would like to express our gratitude for the support FCC Environment will be providing towards our continual progress in player development.

“Within FVFA, we are constantly striving to improve our environment and enhance the experience for everyone connected to it. This partnership will enable us to support the further development and provision of our young athletes.

“We are delighted to have secured such a fantastic partner and look forward to working closely together over the coming months.”

The partnership between the two companies goes beyond assistance with a new strip.

Educational sessions will also be organised for the young players to help to inform them about the rapidly-changing world of recycling.

As experts in energy recovery and the creation of Green Energy from waste, FCC Environment will be working to teach the youngsters about the importance of recycling.

Stuart Mander, from FCC Environment, said: “We’re thrilled to announce our partnership with the FVFA.

“As well as supporting what is a fantastic project for young people we also hope to help spread the word about the importance of recycling.

“We’re committed to Scotland and the region and we’re working hard to bring as much as we can to the community.”

Forth Valley Football Academy – an unique and innovative partnership between Scottish FA, Falkirk, Stenhousemuir and East Stirlingshire Football Clubs based at Scotland’s University of Sporting Excellence, Stirling University – is recognised  as the first regional football academy in the UK and operates within the elite tier of the Club Academy Scotland youth development programme.

FCC Environment is one of the UK’s leading waste manage resource companies and recently signed a contract to provide waste collection services for Falkirk Council.