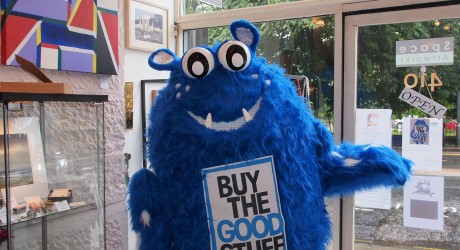 CITY social enterprises and their representative body, Edinburgh Social Enterprise Network (ESEN), have gained plaudits for their promotion of this burgeoning and dynamic social enterprise business sector this week.

Following the successful launch of ESEN’s ‘Celebrate the Good Stuff’ report in autumn 2015 – further recognition of the impact of social enterprise in the city and beyond have marked them out as a business trend worth watching in 2016.

Says a spokesperson: “An impressive 8,000 people are involved in the running of social enterprises in the city, according to the 2015 report, of which 1,220 are staff, 650 are trainees and over 6,000 are volunteers providing a wide range of business, activities and resources in Edinburgh.

“This week, Councillor Gavin Corbett raised a motion in Council regarding the impressive impact ESEN has had on the city, reaffirming the contribution the social enterprise sector has made to the local economy – growing from £44 million to £120 million in just two years.”

Green Economy spokesperson, Cllr Gavin Corbett, said: “If any other part of the city economy had trebled in the last three years, it would be shouted from the rooftops. It’s probably the nature of social enterprises that they are getting their heads down and making their businesses work, so that we don’t always see the quiet revolution happening all around us.

“In the age of big corporate tax scandals it is reassuring to know that there are businesses who can act responsibly, do immense social and environmental good, and show that they can be commercially viable. That’s something for the capital to celebrate.”

The spokesperson adds: “This in-depth Scottish report, considered social enterprise against a wider set of parameters and highlights the ‘youthful’ group of organisations contributing to one quarter of the social enterprises active today – that were formed in the last five years – and now seen as an important factor in addressing unmet social needs and in driving up innovation in the sector.

“In addition, almost all local authorities contain one-to-five per cent of social enterprises with larger concentrations in Glasgow (14 per cent) and Edinburgh (13 per cent) and Highland (ten per cent).

“It has also been found that social enterprises weave between four main fields: community amenities (centres and halls), arts and creative industries, childcare and health and social care.

“And as a result of the work of the city’s social enterprises and ESEN, the Business Gateway and the City of Edinburgh Council Economic Development team, more and more people in Edinburgh are both finding out about social enterprise and making the choice to get involved.”

Emma added: “New social enterprise entrepreneurs are coming from a variety of sources – universities, schools and colleges through to former sole traders wanting to operate their business with an ethical purpose at its very heart.”

ESEN provides a range of services to social enterprises including: one-to-one support, networking, information and signposting, promotion and representation. It is a partner in Edinburgh’s Third Sector Interface.

Further information can be found on ESEN’s web site: www.edinburghsocialenterprise.co.uk.

‘Buy the Good Stuff‘ is a call to action to the general public to consider how they shop around the city and can really make a difference by purchasing from social enterprises. Over 200 social enterprises are trading in Edinburgh, from cafes and retail, to creative industries and leisure generating income and reinvesting their profits into the community for social or environmental benefits.

Edinburgh was the first place in Scotland to run a marketing campaign to raise awareness of social enterprise shopping with adverts for ‘Buy the Good Stuff’ appearing on the side of eight Lothian Buses. The Buy the Good Stuff campaign is supported by the City of Edinburgh Council and delivered by Edinburgh Social Enterprise Network.

What is social enterprise? Social enterprise is a way of doing business that benefits the community, society or the environment. Social enterprises must reinvest all of their profits into their social or environmental aims and many also achieve their aims through the way that they run their business, for example by employing people who might otherwise find it difficult to find a job.

MEDIA RELEASE issued by Interwoven PR. You too can post media releases on allmediascotland.com. Email here for more information.