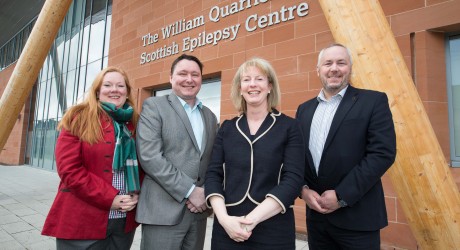 THE Scottish Government Cabinet Secretary for Health and Wellbeing, Shona Robison MSP, has praised social care charity, Quarriers, for leading the way in epilepsy services in Scotland – on a visit to the world-class William Quarrier Scottish Epilepsy Centre in Govan.

The state-of-the-art £6.4 million William Quarrier Scottish Epilepsy Centre is recognised as the only one of its kind in Scotland, offering assessment for people with complex epilepsy and diagnosis where the condition is uncertain.

The 12-bed centre was built in Govan to be close to the world-renowned Institute of Neurological Sciences at Glasgow’s Queen Elizabeth University Hospital (formerly the Southern General).

Says a spokesperson: “The majority of Scotland’s trainee neurologists have access to the centre as a learning facility while it also offers training for medical trainees, doctors, nurses and conducts research into epilepsy.

“As one of Europe’s leading epilepsy services, Ms Robison was given an insight into the centre’s operations including its unique video monitoring technology which allows specialists to determine more efficiently if a patient has the condition.”

The Cabinet Secretary for Health, Wellbeing and Sport said: “The William Quarrier Scottish Epilepsy Centre is the first of its kind to offer an enhanced service which will significantly improve quality of life for those living with the condition.

“The centre is a great example of the third sector and NHS Scotland working together to build and deliver world-class services to people with epilepsy, providing a unique care package for patients.”

Quarriers head of Epilepsy Services, Gerard Gahagan, led the tour for Ms Robison and introduced her to patients who were able to share their experiences at the Centre.

He added: “The Cabinet Secretary for Health, Wellbeing and Sport Shona Robison MSP’s visit to the William Quarrier Scottish Epilepsy Centre was a great opportunity to highlight the world-leading work Quarriers is undertaking in the diagnosis and treatment of epilepsy.

“Epilepsy is more than just a medical condition. Left unmanaged, it can impact on every aspect of life-education, employment, relationships, self-confidence and self-esteem.

“The William Quarrier Scottish Epilepsy Centre ensures people with epilepsy in Scotland and further afield benefit from some of the most advance assessment and diagnosis technology in the world.”

The William Quarrier Scottish Epilepsy Centre was opened by the now First Minister of Scotland, Nicola Sturgeon MSP, in 2013.

Charity founder, William Quarrier, first became interested in the plight of those living with epilepsy in the 1900s when a colony of mercy was established in Quarrier’s Village.

Since the colony was set up in 1906, the charity has treated thousands of patients.