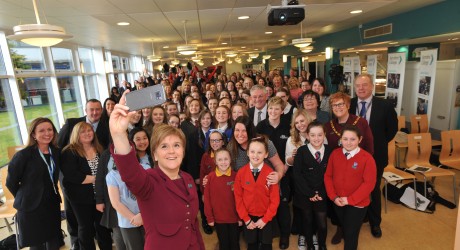 FIRST Minister, Nicola Sturgeon MSP, has put her backing behind an Ayrshire College campaign that aims to inspire young women to take up traditionally male-dominated careers.

The ‘#ThisAyrshireGirlCan’ campaign was created by the Ayrshire College Student Association to encourage more women to think about careers in sport and STEM areas where female participation is traditionally low.

The First Minister visited the college’s Kilwinning campus on International Women’s Day for the premiere of a specially created film to mark the campaign’s one year anniversary.

In front of an audience of primary and secondary schoolgirls, and female college STEM students, two of the stars interviewed in the video explained what motivated them to choose their STEM careers.

Pupils, students and invited guests were in attendance to see the inspirational film for the first time, before they took part in a Q&A with the First Minister.

Ayrshire College organises events throughout the year to encourage young women to consider a career in traditionally male-dominated sectors.

The latest of these was a CoderDojo coding club held at the college’s Kilwinning Campus for the primary schoolgirls after they attended the First Minister’s visit.

The popular coding club promotes computer science and technology in a fun, thought-provoking and inspiring way, encouraging seven to 17 year-olds to consider computing as an option at school, college or university.

First Minister, Nicola Sturgeon, said: “The efforts of fantastic campaigns like this one at Ayrshire College are helping to promote STEM careers to girls and women and highlight the different routes young women can take through Modern Apprenticeships, college and university courses.

“However, we want to go further and break down the stereotypes that have seen a career in digital technology, engineering and science as something women have traditionally been less likely to pursue than their male peers.

“#ThisAyrshireGirlCan will not only help young women see the opportunities that a STEM career can bring and give them confidence to pursue their ambitions, it will also help Scotland’s economy to be as strong as it can be – by ensuring that we are tapping into the talents of all of our people and not underusing the skills of half of our population.”

Angela Alexander, Ayrshire College Student Association student president, said: “The Student Association developed the #ThisAyrshireGirlCan initiative after being inspired by the national #ThisGirlCan campaign which encouraged women into sport and celebrated achievement. We felt that Ayrshire College has some pretty inspirational women of its own.

“It is important for families to understand the opportunities available to young people and to help encourage and foster an environment where future career choices are based on interest and aptitude rather than gender.”

Heather Dunk OBE, principal of Ayrshire College, said: “One of our key objectives is to tackle gender stereotyping in career and learning choices, and we work with the Student Association, employers, local authorities and other partners to achieve this.

“Although Angela Alexander is nearing the end of her term as student president, #ThisAyrshireGirlCan will live on as a fantastic legacy from an outstanding student leader.”