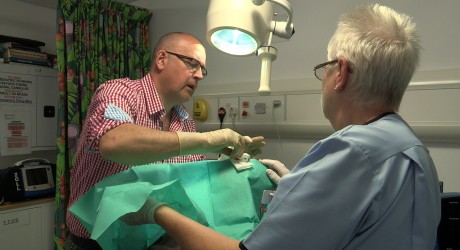 THREE years ago, BBC ALBA visited the Isle of Harris for a documentary looking at life for an island GP and the doctor’s round-the-clock role caring for the crofters, fishermen and families of the Hebridean island.

During that programme, we met Dr Donald John Murray, the gregarious half-doctor, half-crofter who covers once a month at the Leverburgh Surgery.

In Trusadh – A Southern Island Practice, we follow Donald John as he travels 1,000 miles from his croft to the tiny Channel Island of Alderney, where he spends half his working life.

It’s a challenging job for any doctor, single-handedly serving a community of around 2,000 and also managing a local hospital with Accident & Emergency – a 24/7 job where the doctor is never off-duty.

With their yachting marinas, fine architecture and affluent and eclectic European vibe, you’d expect the Channel Islands to be a stark contrast to the Outer Hebrides. But the three square-mile island of Alderney is an overlooked haven amidst its better-known neighbours which include Guernsey and Jersey.

As we spend a week in the life at this other island practice, some surprising similarities are revealed.

A place united by a challenging past where a sense of fun and community spirit still runs strong – and where the doctor is still at the heart of the community. And for our Scottish island doctor, we witness how Alderney has clearly become a home from home.

Produced by MacTV, Trusadh: A Southern Island Practice – Alderney will be shown on BBC ALBA on Monday 21st March at 9.00 until 10.00pm.