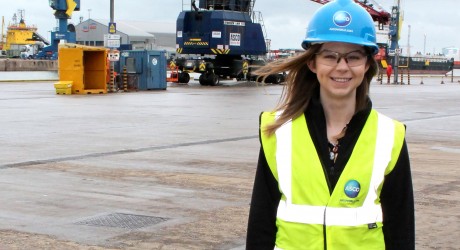 IN a competitive marketplace, hard work and determination are vital to ensure you stand out from the crowd in the world of work.

For Laura Nicoll, 21, who was named ITCA Training’s Learner of the Year at the end of 2015, her passion to succeed has been evident from a young age.

Often, many people don’t know which career path they want to follow when they leave school, and to ensure working in the oil and gas industry was the right choice for her, Laura secured a summer work experience placement with a major name in the industry as an assistant plant coordinator.

Laura, of Brechin, explained: “I carried out a range of tasks including raising and sending requisitions to vendors, and assisting with the control of hire and purchase of new equipment.

“I really enjoyed working for the summer in my placement as it gave me an insight into the oil and gas industry.”

She explained: “After completing the course, I felt that it would be better for me gain valuable work experience at the same time as continuing with education, and so thought the modern apprenticeship was the ideal route for me.”

During her time with ITCA, Laura carried out a Modern Apprenticeship in logistics operations management, and received the special Learner of the Year accolade from the company in recognition of her hard work and enthusiasm.

She said: “Choosing to study a modern apprenticeship in logistics was easy as it was something I was very much interested in, which has been influenced by my dad as he also works in the logistics industry.”

After completing the course, Laura’s determination to succeed was rewarded when she was offered a base administrator post at ASCO, at the company’s office on Albert Quay, Aberdeen.

Craig Lennox, CEO Europe at ASCO, said: ‘‘Laura has clearly committed herself to being her best and was rightfully recognised with the Learner of the Year award from ITCA.

“We are proud she is part of our team. The type of dedication and talent demonstrated by Laura is something we want to nurture at ASCO and is testimony to why we run such a successful apprenticeship programme.”

ITCA managing director, June Jones, said: “Laura’s enthusiasm to succeed has been clear throughout her modern apprenticeship, which led to her being awarded the Learner of the Year. We wish her every success in her future.”