Media Release: On tour across Scotland: Rosie Kay Dance Company – 5 Soldiers: The Body is the Frontline 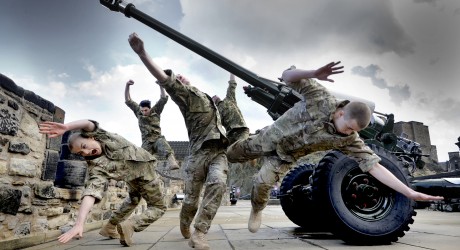 Award-winning Rosie Kay Dance Company brings its critically-acclaimed 5 SOLDIERS: THE BODY IS THE FRONTLINE to Scotland.

“War from a female perspective packs a punch…taut, visceral, compassionate” ★★★★★ THE OBSERVER

Top dance of 2015: The Guardian, The Observer, The Independent

“Rosie Kay’s use of dance to help create a complex and nuanced picture of conflict is one of the most innovative and compelling initiatives that I have experienced in the aftermath of Iraq and Afghanistan. It demonstrates how art can be used as a powerful tool in the healing process, how it can touch the extended family of those who have been caught in the horror of battle and how it can send a universal message about the soldier. It is an extraordinary achievement which will make a difference to many people.” General Sir Nick Parker, KCB, CBE

ROSIE Kay Dance Company, the international award-winning dance theatre company headed by Edinburgh-born artistic director and choreographer, Rosie Kay, is bringing its thought-provoking and poignant 5 Soldiers: The Body is the Frontline to Scotland – from Friday 29 April to Sat 28 May 2016.

5 SOLDIERS has already received high praise from its performances with five-star reviews and a string of accolades, including being awarded ‘Best Independent Dance Company’ and nominated for ‘Best Choreography’ (modern) at the 2015 Critics’ Circle National Dance Awards; Best Dance and Top 10 Dance (2015) in The Guardian and The Observer; Best Dance and Top 5 Dance (2015) in The Independent; Best Dance Production (2015) from North East Theatre Guide; and awarded an Arts and Health Special Commendation by the Royal Society for Public Health for the company’s excellent contribution to arts and health practice.

“Lust, shock and awe… 5 Soldiers is a disturbing, illuminating and necessary glimpse into a world we mostly prefer to ignore” ★★★★ THE GUARDIAN

A visceral ‘tour de force’ of the senses, 5 SOLDIERS has a powerful physicality, moments of humour and is full of honesty, all inspired by input from serving and former soldiers. It has been endorsed as ‘getting it’ by its military audiences. In movement, the performance weaves a story of physical transformation, helping us to understand what makes a soldier and how the experience of warfare affects those that choose to put their life on the line.

To fully understand the impact of war, Kay undertook an intense period of field research.

She joined The 4th Battalion The Rifles for two weeks and experienced full battle exercises on Dartmoor and Salisbury Plain. She then visited a military rehabilitation centre to see the effects of conflict and training on the soldiers’ bodies. With her trademark of intense physicality and athleticism, this high-octane performance enables a glimpse into the training that prepares soldiers for the sheer physicality of combat, for the possibility of injury and the impact conflict has on body and mind.

Regarded as one the UK’s leading female choreographers, Kay choreographed the 2013 feature film Sunshine on Leith, with songs by The Proclaimers. She was the first choreographer to be appointed the Leverhulme Artist in Residence at the School of Anthropology and Museum Ethnography, University of Oxford (full biography in notes to editors).

5 SOLDIERS has an extensive community engagement programme in each area working with local communities, service personnel and their families, young people and veterans which culminates in a community performance prior to the performance on the Saturday night. On the Friday in each of the areas, the dancers will take to the streets/ public spaces to give a 15 minute outdoor taster of the performance. On the Friday night, there is also a post show Q&A session with Rosie Kay, the cast and a local Commanding Officer.

This Scottish tour has been made possible through funding from Creative Scotland, The Armed Forces Covenant Fund, ABF The Soldiers’ Charity and tour partners.

Rosie Kay said: “I’m delighted to be bringing 5 Soldiers to Scotland, and we have been overwhelmed by the level of support already from all our funders and tour partners. As a dancer who trained and danced in Edinburgh, it means a great deal to be touring to Scotland.”

* Rosie Kay Dance Company is an internationally-recognised dance-theatre company that creates exciting and challenging work that tours in unique and captivating ways to theatres and unusual spaces such as military bases. Established in 2004 the company exists to nurture and further the creative talents of choreographer and director Rosie Kay, who is recognised as a leading choreographer in dance, film and theatre. Award-winning and nationally prolific, Rosie Kay Dance Company makes a dynamic range of shows, always exploring in exciting ways what dance can be and how dance can be presented.

* Rosie Kay BA (Hons) FRSA, trained at London Contemporary Dance School graduating in 1998 and after a career as a performer formed Rosie Kay Dance Company in 2004. Kay has created award-winning theatre work that include: Sluts of Possession (2013) in collaboration with the Pitt Rivers Museum; There is Hope (2012) exploring religion; 5 SOLDIERS – The Body Is The Frontline (2010), based on extensive research with military which toured in the UK and Internationally and Double Points: K (2008) in collaboration with Emio Greco|PC. Site-specific works include: Haining Dreaming (2013) a Get Scotland Dancing project; The Great Train Dance (2011) on the Severn Valley Railway, a Cultural Olympiad London 2012 commission and Ballet on the Buses (2007) in collaboration with Birmingham Royal Ballet and Fierce! Festival. Kay creates installation and dance film, with 5 SOLDIERS - the film, exhibited in The Herbert Gallery’s ‘Caught in the Crossfire – Artists responses to Conflict, Peace and Reconciliation’, Stadtmuseum Dresden, autumn 2014, and selected for inclusion in the film collection of la Médiathèque du Centre National de la Danse, Paris. Feature Film credits include: Choreographer to the Box Office hit Sunshine on Leith (2013), and Brummoves (2014).

Kay has initiated LAB and Scratch training courses for recent graduates cross-arts and continues to teach, lecture and speak on dance, research methods and running an arts business. Kay was the first Leverhulme Artist in Residence to the School of Anthropology and Museum Ethnography, University of Oxford, 2013-2014 and has continued as a Research Associate. She is associate artist of DanceXchange, Birmingham. Awards include 1st Prize Choreography, International Solo Dance Festival Stuttgart, Award from The Queen as ‘Young Achiever of Scotland’, Bonnie Bird New Choreography Award and nominated as Best Independent Company, National Dance Awards, Critics Circle. She is a Fellow of the Royal Society of Artists, listed in Debretts and an MCR of St Cross College, Oxford.

MEDIA RELEASE issued by Wendy Niblock. You too can share your stories (aka press or media releases), on allmediascotland.com. Email here for more information.